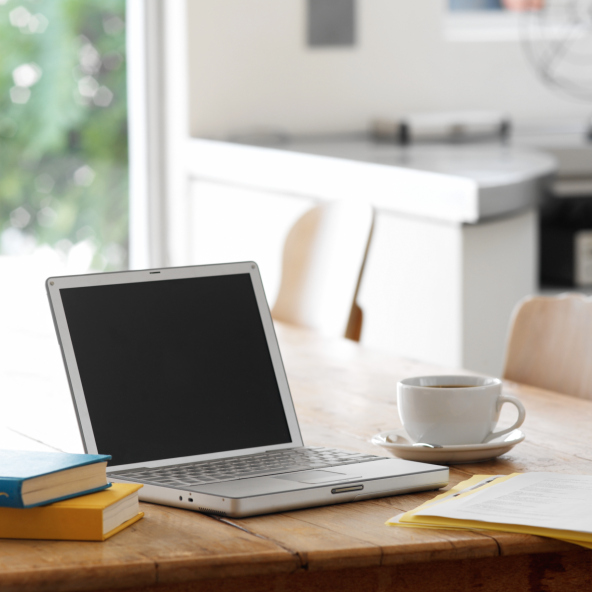 Support can happen at home (and not at a ‘perfect’ office environment).

I understand that simply by having six children (soon to be 7), some might already say I’ve “gone crazy.” But I assure you… as I sit here and write to you, I am of sound mind… mostly. 🙂

Soon after my first daughter was born, I gave up being an employee and ventured out into the world of the entrepreneur. My first business was being an independent technology consultant in Chicagoland.

Soon after that, I got a bad case of “internet business-itis” and have never fully recovered. These days, while I do have a beautiful, spacious and quiet office just a few steps from my home, I spend far more time at the kitchen table, where I end up working most days.

From this most unmajestic of positions, I do my best to support my kids and my wife.

What follows are a few of the things I’ve learned over the years about how to get things done in the midst of what some might refer to as pure pandemonium.

The fact is, no one can do more than one thing at a time. Multi-tasking is a bunch of B.S. You can either choose to accept this or you can forever put yourself at the mercy of that “feeling” that tells you you should be getting MORE done at any one moment than you are.

That feeling is a prison from which you can free yourself in an instant. Simply make a decision to accept that you will do one thing at a time (duh) and appreciate that thing as you are doing it.

Busy is a frame of mind. In the entrepreneurial world, it almost seems like “being busy” is sometimes a badge of honor that people wear. They aren’t just “busy,” they need everyone to know how busy they are. Busy is easy. Anyone can do it. But I venture to say that “busy” isn’t a goal worth pursuing.

To me, productivity isn’t about getting a long list of things done, it’s about leverage. How big is the lever I’m using and how big is the mountain I’m moving? When I first became an entrepreneur, I had no lever. Instead, I ran all around the big city of Chicago fixing people’s computers. Truth be told, I probably spent more time in my car or on the train than I actually did billing clients. I was busy. It just wasn’t the smart kind of busy.

Over the years, I’ve realized that the goal is to make sure I’m increasing the amount of leverage held within every action I take.

This is why I focus more on what I do best (writing and thinking) and less on those things I’m simply able to do.

Over time, this means I can pay attention to LESS… that I can do less and actually create more.

As Thoreau says, “A man is rich in proportion to the number of things which he can afford to let alone.”

#2 – It’s Not About Getting Things Done, It’s About Doing the Right Things

We have a bizarre obsession in our society with getting things done. Gotta get it done. Gotta cross things off of our list.

If you’ve ever done this, you probably realized the cosmic joke… once you “get it done,” the universe hands you more to do! It never ends.

A much smarter “obsession” to have is to make sure you are doing the right things. This is perhaps the hardest and most difficult challenge of them all.

To identify the “right things,” you need clarity. You have to know where you are trying to go. At the very least, you want some picture of how you’d like your life to look. Otherwise, you have absolutely no smart way to discern what is and is not a good use of your time.

Give me 10 busy people and I’d bet that 9 of those are simply lacking true clarity about what does and does not belong in their lives.

Once you get clarity, then you actually have to take action congruent with that clarity. You need to develop the ability to say NO more often than you say YES. If you were trained to be a “Yes Man” or a “Yes Woman” like I was, this is a difficult habit to break.

But break it you must. And to do that, you have to become OK with your goals taking priority in your life over the goals of others.

#3 – You Are Capable of So Much More Than You Realize

When I started running cross country in high school, my first 5K race clocked in at 21+ minutes. Not a world class performance by any stretch of the imagination.

But that was during the time when I thought that running a mile was no different than running a marathon.

A year or two later, I was running 5K races at the 16/17 minute mark. The first mile was generally right around 5 minutes.

What was the difference? Practice. And daily expansion of what I thought was possible.

The fact is, “quiet” turns out to be quite a relative term. And these days, my idea of “quiet” has morphed to be just about any environment where a real fire isn’t actually burning in my home. I know it sounds like a joke, but I’m serious.

If I described the working conditions I place myself into on a daily basis, and then show someone the output of work I produce, most people wouldn’t believe it possible. They’d think I was a genius or something.

I’m not. I simply practice a lot. I tell you all of this to convey that you are capable of so much more than you probably realize. But you never discover just how much if you insist on fortifying the boundaries of your comfort zone.

Instead of waiting for the “perfect” work environment to present itself (good luck with that!), how about starting the daily practice of being productive regardless of environment?

It’s not going to be fun at first, but over time, you’ll probably surprise yourself.

The real question to ask yourself is this: “Who controls the definition of what is possible for me?”

If you want the answer, just go look in the mirror.

Posted in Careers, Family, Lifestyle, Productivity, Self-Improvement
This error message is only visible to WordPress admins