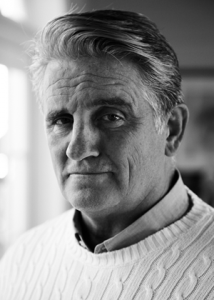 Mark Ford isn’t your typical success story. From an early age, he knew he wanted to become a writer — but never did he imagine he’d become one of the most sought-after entrepreneurs in the newsletter-publishing world.

Mark is also an expert investor, and has started more than 100 businesses. Among them, he founded ETR in 2001.

His titles Automatic Wealth and Ready, Fire, Aim have been recognized as New York Times and Wall Street Journal bestsellers.

Mark has also authored many other books, including The Pledge, Living Rich, Seven Years to Seven Figures, and The Reluctant Entrepreneur.

He now publishes the newsletter Creating Wealth, and continues to lend his expertise to ETR, Palm Beach Letter, and others through his writing.

Mark’s real-world, candid advice shaped Early to Rise and has served as the foundation for many of the principles and success and self-improvement strategies we continue to share with readers today.

Mark has long been recognized and applauded for his no-nonsense approach to business and wealth building. As a self- made millionaire, Mark “walks the talk,” epitomizing the fact that success comes down to what you’re willing to do and how dedicated you are to achieving it.

We are thrilled to have caught up with Mark for this interview. We believe his advice continues to get better with time and we know you’ll glean some serious inspiration from his insights.

What originally inspired you to become a writer and entrepreneur?

When I decided to get rich, which has been well documented in my writing and on Early to Rise, I also had two other goals: to become a professional writer, and to be a good teacher. In retrospect, I have been pursuing those goals all my life.

As to becoming a writer, I’ve wanted to be one since I was about six years old. I wrote a poem called “How Do I Know the World is Real” and my father, who began his career as a playwright before beginning a family of eight children, told me it was “quite good for someone my age.” My mother was a huge reader and admired writers. My godparents were writers. It was in my family.

So was teaching. Both my parents were teachers. So was my maternal grandmother. Three of my siblings are teachers. That has always been part of my value system too. I don’t think I spent a lot of time wanting to be a teacher as a kid. It was more like something I expected of myself.

I never set out to be an entrepreneur. I set out to get rich. Entrepreneurship was something I got into, gradually and indirectly. My first move was to become an invaluable employee — to become an intrapreneur. After that I began starting businesses on my own.

I first wanted to be rich when I first realized I was poor. I showed up for school in first grade in hand-me-down clothes and the way the other kids responded to me made me want to be rich.

How do you maintain or find new inspiration?

I read a lot, listen to podcasts, travel, go to museums, talk to interesting people— the usual stuff.

How would you advise people to set goals?

Before you attempt to set your goals, you have to spend some time determining your core values — your feelings about good and evil that are buried deep in your heart. If you set goals that contradict your core values, you will wake up one day and say, “I did everything I said I wanted to do. But so what?”

Once you’ve determined your core values, you can convert them into long-term goals. Seven years is the longest it’s ever taken me to accomplish any of my goals.

When setting your goals you must be specific. The goal must be actionable, time-oriented, and realistic.

At the beginning of each year, I write down a single goal for the year in four areas of life: health, wealth, social, and personal. And I make each goal significant, yet specific.

Do you have a formula for success you’d recommend to others based on your wealth-building expertise?

I have lots of them. But here’s a formula based on my “Golden Buckets” system that anyone can follow:

With every paycheck you get, cover your necessary bills first, then put some money towards savings and some towards investing. Add to your spending account, only after you’ve “paid yourself.”

I’ll also share some of the key tenets of my wealth-building advice.

First, accept responsibility for your future and the fact that you are solely and completely responsible for your current financial situation.

Secondly, stop complaining about how much you make and commit to adding to it with a second income. Take an honest inventory of the non-productive hours you spend monthly and devote those to building wealth instead.

When it comes to investing, I tell people to abandon the notion that you must get rich now, and instead set realistic expectations. Yes, 10-to-1 returns happen. But they rarely happen in the stock market. Eight percent to 12 percent is a high rate of return. If you get an 8 percent return, you’ll double your money every nine years. If you get a 12 percent return, you’ll do it in six years. You can get very rich by doubling your money every six years.

Next, recognize that your net investible income (the amount of cash you have after spending and saving) is the single most important factor in determining how quickly you will become wealthy. So, the idea is to add to the income you have now by creating additional streams of income and then directing those extra streams to investing. The journey to millions of dollars is earned $100 at a time. To nd an extra $10,000 to invest this year, you don’t need to come up with a $10,000 idea. It’s easier—and smarter — to come up with several $100 ideas and then repeat them over and over again.

What time do you usually wake up in the morning?

I wake up at 6:30 a.m. Early rising is key to success, and I’ve written plenty on that and created a namesake business on that very idea (with ETR). You will get more work done, accomplish more important tasks, advance your career more quickly, be more respected at work, make more money, and will have more time to devote to your health and happiness if you’re an early riser.

Do you have any daily routines that keep you grounded/centered?

Yes. I always organize my days. The first thing I do after I get up and dressed is sprint, stretch, and meditate. Then I devote four hours to writing.

I generally do a mid-day workout of Jiu Jitsu and I don’t take any meetings until after that. I’ve trained everyone I work with to expect not to be able to interrupt me in the morning.

At noon, my focus shifts from my primary objectives to others’ needs, including conducting any necessary meetings.

I don’t return phone calls until late afternoon because it’s not a top priority for me.

If I have spare time in the afternoon, I devote it to writing things that aren’t deadline-specific.

Checking email is the second-to-last thing I do, ahead of planning for the following day. I only check email once a day.

If I’ve accomplished all of my priorities, I often reward myself with a second workout in the evening.

How do you prioritize your most important tasks?

For me, it’s more a question of how I don’t. I don’t allow my priorities to be dictated by urgencies and emergencies. If you want to have a better life, you must ll it with good days. The best way to do that is to organize your day according to your personal priorities — doing the most important things first.

It’s easy to do. Yet 80 percent of the people I know — and I’m including all the intelligent and hardworking people I work with — do exactly the opposite. They organize their days around urgencies — taking care of last-minute issues that should have been dealt with earlier. Or doing tasks that help other people achieve their goals while ignoring their own.

Doing first things first is a very simple discipline. Yet its transformative power is immense. It can change your life — literally overnight.

What have been the most important contributors to your success?

There are three: I am willing to work harder than just about anyone I know. I like to spend money but I like to save even more. And I am a lifelong learner. These are the three fundamental qualities of any one or any group that wants to acquire financial wealth.

Do you have a mentor?

No, but if I am open to it, I can learn from just about anyone.

What would you say to someone who’s struggling or frustrated in his/her business or entrepreneurial pursuit?

And I would also reiterate the advice I mentioned earlier. Set realistic expectations.

The public today has been deceived on this important point by reading stories about individuals who invested every cent they had in a business idea that exploded into a billion-dollar bonanza. These are great, inspiring stories. But they are not normal. For every person who got rich this way, there are 999 who went broke doing the same thing.

Is there one book you’d recommend people that’s personal inspired you?

I couldn’t name just one! Many books have inspired me. Here’s a sampling of some of my favorites.

Some of my non-fiction favorites are Ten Philosophical Mistakes by Mortimer J. Adler, Economics in One Lesson by Henry Hazlitt, and The Elements of Style by Strunk & White.

I also have favorite classics — The Adventures of Huckleberry Finn by Mark Twain, Pride and Prejudice by Jane Austen, and A Tale of Two Cities by Charles Dickens are on that list.

My favorite modern novels include Lolita by Vladimir Nabokov, The Old Man and the Sea by Ernest Hemingway, and The Road by Cormac McCarthy.

What other writers and entrepreneurial leaders do you look up to?

I think looking up to someone else is a very bad mental habit. There are plenty of writers I admire. Not as many entrepreneurs.

To win my admiration you have to do well and do good. Most of the successful businesspeople I know care too much about doing well and not enough about doing good. Of course everyone talks about helping a certain amount of people. But it’s in the daily practice of business where character shows. It’s how you treat the least of your brethren.