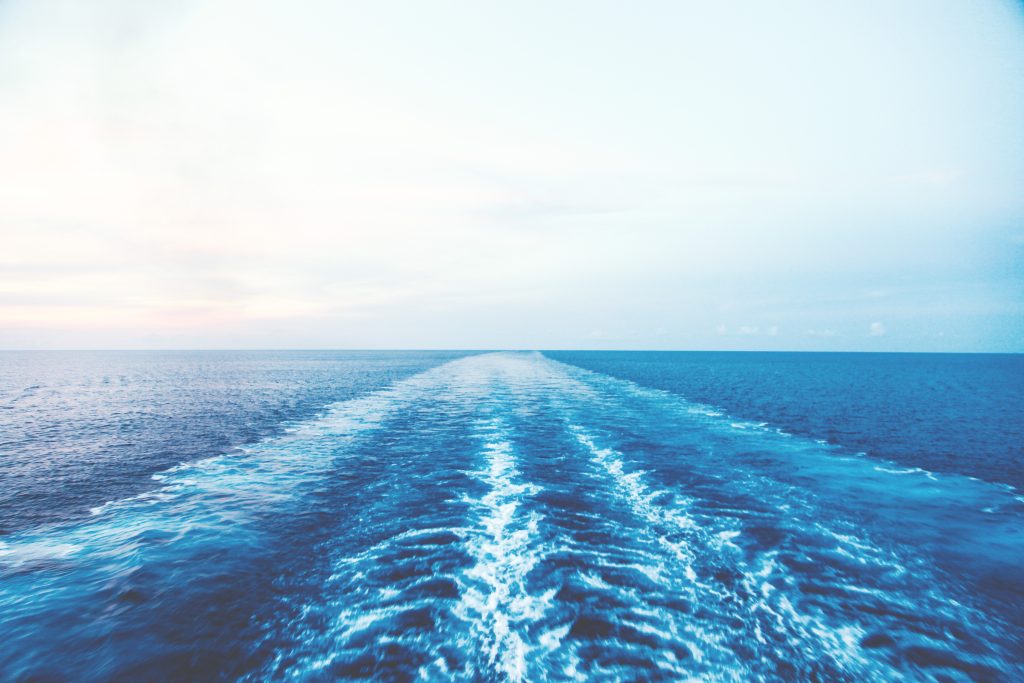 “Ian told me his twentysomething years were like being in the middle of the ocean, like this vast, unmarked body of water. He couldn’t see land in any direction, so he didn’t know which way to go. He felt overwhelmed by the prospect that he could swim anywhere or do anything. He was equally paralyzed by the fact that he didn’t know which of the anythings would work out. Tired and hopeless at age twenty-five, he said he was treading water to stay alive.”

This is how the fourth chapter of a new book I’m reading starts.

The book is called The Defining Decade: Why Your Twenties Matter — And How to Make the Most of Them Now by clinical psychologist Dr. Meg Jay.

I think Ian’s ocean metaphor — btw Ian is one of Dr. Jay’s patients — perfectly captures how a lot of twentysomethings feel about their lives and the choices they have to make.

What you need to know about Ian’s ocean metaphor is it’s flawed.

Although it’s not perfect, I’d say it feels real to most twentysomethings, therefore it’s a good place to start looking for answers.

Dr. Jay says, “I try to, as psychologists say, ‘meet my clients where they are,’ but Ian’s ocean metaphor was a real problem. When I thought of myself out there with him, with so many directions that seemed the same, I couldn’t come up with a good solution either.”

The question Dr. Jay asks Ian then is, “How do people get out of the ocean?”

I want you to think about this question too because it will put you in Ian’s headspace.

Ian’s answer, which I assume is close to what your answer would be is:

“I would say you pick a direction and start swimming. But you can’t tell one way from the other, so you can’t pick. You can’t even tell if you’re swimming toward something, so why would you use up all your energy going the wrong way? I guess all you can do is hope someone comes along in a boat or something.”

This is stage two of escaping the ocean. I’m going to call it False Hope.

The rescue boat feels like the best solution. It feels like it solves your problem instantly. But it doesn’t, really.

Dr. Jay says, “There is a certain terror that goes along with saying, ‘My life is up to me.’ It is scary to realize there’s no magic, you can’t just wait around, no one can really rescue you, and you have to do something. No knowing what you want to do with your life — or not at least having some ideas about what to do next — is a defense against that terror. It is a resistance to admitting that the possibilities are not endless. It is a way of pretending that now doesn’t matter. Being confused about choices is nothing more than hoping that maybe there is a way to get through life without taking charge.”

“Rather than take charge, Ian hoped someone would come along, pick him up, and carry him off in a predetermined direction. It happens all the time. Maybe Ian would hop aboard with a group of friends or with some girlfriend. He’d go their way for a while and be distracted from his life a bit longer. But I knew how that would play out. He’d wake up one day in a far-off land, working in a job or living in a place that had nothing to do with Ian. He would be a world away from the life he would suddenly realize he wanted.”

Now you see the false hope I’m talking about. The next step to escaping the ocean is Taking Charge.

As Dr. Jay said previously, “There is a certain terror that goes along with saying, ‘My life is up to me.’”

You must overcome this terror.

Overcoming the fear of taking charge is not rocket science. You really only have two options: 1) Jump on a rescue boat that takes you somewhere you probably don’t want to go 2) Start swimming in one direction.

Since we know option one is a recipe for a miserable life, your only option is to take charge of your life.

Some of you might feel like taking charge is easier said than done. Of course, you’d be right. That’s because there’s a third option, what you’re doing right now, which is treading water and not making any choices.

But there’s no such thing as not making a choice. When you choose not to choose, that in itself is a choice and one that has consequences you’ll have to pay for later in life.

If you’re one of those people who say, “I’ll let my future self deal with this,” you’re in for a rude awakening.

The truth is your options in your thirties and forties are far fewer than you have in your twenties. This is a fact that Dr. Jay repeats throughout the book. A fact that is hard to conceptualize.

But, if you will, imagine going to interviews when you’re 35 and your resume is filled with miscellaneous barista and bartending jobs — jobs you hopped around from to pay your rent while you traveled and chose not to make choices in your twenties. You’ll start to realize your future self is going to hate you.

A recent grad at least has a good excuse for a lack of real work experience on her resume — she was in school. But what’s your excuse?

Once this reality sinks in, you will see that your only option is to take charge of your life today.

This brings us to stage four of escaping the ocean: The Illusion of Choice Paralysis.

Now that you’ve decided to take charge, your enthusiasm and energy will likely hit a wall. Seeing that you have options may, in fact, leave you feeling more stuck than you were before.

To liken yourself to Ian’s metaphor, you’re at the point where you’re treading water, and you’ve now decided you need to pick a direction and swim. But which way do you go?

Ian had two objections to choosing a direction: 1) how do you know which direction to start swimming? 2) what if you choose a direction and find out later it’s the wrong direction?

You might think you have a lot of options, and, again, you do have more options than you will in your thirties — but you don’t have as many options as people contend.

Your parents, teachers and whoever gave your commencement speech have told you you’re lucky to have options, which they never had. That you can do anything with your life if you set your mind to it. And sure, it seems that way. The changes in technology that millennials have witnessed in their lives make anything seem possible.

But it’s mostly BS and Dr. Jay explains why:

“Being told you can do anything or go anywhere is like being in the ocean you described. It’s like standing in front of the 24-flavor table. But I have yet to meet a twentysomething who has 24 truly viable options. Each person is choosing from his or her own six-flavor table, at best.”

(Editor’s note: Dr. Jay is referring to the classic Jam Experiment — where researchers concluded that the more choices we have on a table (24 flavors of jam vs. 6 flavors) the less likely we are to choose one.)

“You’ve spent more than two decades shaping who you are. You have experiences, interests, strengths, weaknesses, diplomas, hang-ups, priorities. You didn’t just this moment drop onto the planet or, as you put it, into the ocean. The past 25 years are relevant. You’re standing in front of six flavors of jam and you know something about whether you prefer kiwi or black cherry.”

The next stage is Seeing Your Real Options. Once you give your head a shake and remember the relevance of your past, you can write down your viable options. There usually aren’t that many, and you’ll soon realize there’s typically one clear winner.

Psychoanalyst Christopher Bollas calls this winning option our unthought known — those things we know about ourselves but forget somehow.

“These are the dreams we have lost sight of or the truths we sense but don’t say out loud. We may be afraid … of what they might think. Even more often, we fear what the unthought known will then mean for ourselves and our lives,” says Dr. Jay.

I’ll tell you what Ian’s unthought know was: He was interested in design. “Now that so much design is happening online, that interests me. The interface between design and technology interests me. I applied to a digital design apprentice program in D.C. a couple of years ago. It was at a company that takes a lot of postgrads and sort of develops and launches them. I wanted to do that but I didn’t get in…”

You probably have a similar story about a job you’ve always wanted and either applied and didn’t get it or didn’t know how to break into the industry in the first place.

This is a real problem that can be solved by talking to people who’ve done what you’re trying to do. Once you’ve uncovered your unthought known and accepted that that’s what you’re going after, it becomes about taking action and solving the next problem.

This is the final stage of escaping the ocean, which can sometimes be the hardest — kicking your arms and legs and beginning to swim.

To overcome your resistance to taking action, you need to re-frame the consequences of your actions.

Ian had two objections to swimming in one direction. I’ve addressed the concern of not knowing which direction to swim by showing that your unthought known is your only real option right now.

His second objection was the concern that he’d spend all of his energy going somewhere he didn’t ultimately want to be. This is where re-framing the outcome of your actions is critical.

Ian: “I don’t know how to get into a job in digital design…“

Ian: “Then what if I start and I change my mind?”

Dr. Jay: “Then you’ll do something else. This isn’t the only jar of jam you’ll ever get to buy.”

Ian: “But if I go for it and it fails, I will have spent it. That choice will be gone.”

Dr. Jay: “It won’t be gone. It will be better informed. Important questions remain: Can you make a living? Will you like the work? These are things you need to find out.”

Without taking action and swimming in one direction, you’ll never answer these important questions. You’ll be left wondering “what if” about your unthought known.

Feeling stuck in your twenties is something everyone goes through. My hope today is that you see some of the myths and illusions you’ve created in your mind that are holding you back. If this article interests you, I recommend reading The Defining Decade. It will open your eyes and change the way you view your twenties.