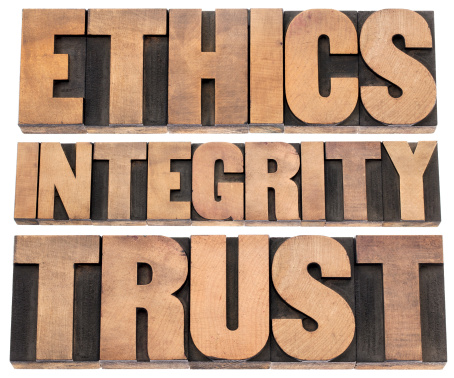 We are living through a period of human history when morality has become a passé topic. For that very reason, vigilance and self-discipline are in order, because morality is perhaps the most important element in leading a successful life.

In that vein, the first step is to define your moral standards, because they serve as an ethical compass that prevents you from straying off course when the winds of temptation begin howling around your ship of life. Millions of people continually crash on the rocks of bad consequences, often suffering irreparable damage because they allowed themselves to get trapped in rough waters without first making sure they had their ethical compasses aboard.

It’s important to understand that for any strategy or plan of action to be sound, it must begin with a solid moral foundation. Without such a foundation, anything a person tries to build is destined to crumble. The bad effect of a bad cause may not show up immediately, but you can be certain that ultimately it will make its appearance.

When I speak of establishing a strong moral foundation, I’m talking about possessing a clear set of values that guides your day-to-day behavior. You need to know what you believe in ahead of time so you don’t have to think about the right action to take at the moment of truth.

If you don’t formulate your moral beliefs ahead of time, your actions may inadvertently be based on spur-of-the-moment whims, emotion, or instant gratification. In other words, you’ll be in danger of revising your ethical standards to fit each new situation as it arises, a practice commonly referred to as “situational ethics.”

An individual who engages in situational ethics is someone who does not possess a fixed standard of right and wrong. Right is simply whatever he perceives to be in his immediate best interest at any given time, which is a fool-proof formula for failure. That’s why it’s so important to decide on a clear, concise set of moral values when your intellect is in control. Then, in highly emotional situations, you’re more likely to act in accordance with the moral standards that you have decided — in advance — to live by.

Which brings us to the subject of integrity. Integrity is an impressive sounding word, one which people like to bandy about rather carelessly. Unfortunately, very few people really understand what the word means, and even fewer practice it — including, and especially, those who expound on it the most.

Integrity is adherence to your code of moral values. It’s one thing to talk about moral values, but quite another to consistently adhere to them.

During a question-and-answer session at one of my seminars, a gentleman in the audience said he believed that all government spending, with the exception of expenditures for protection of citizens’ lives and property, was theft, and therefore immoral. He confessed he felt guilty because he was a builder of government housing (meaning that his main source of income was derived from money extracted primarily from unwilling individuals, euphemistically referred to as “taxpayers”).

It was a lucrative business for him, and he was in a quandary as to what to do. He asked me if I thought it was wrong for him to continue to profit from taxpayer money.

Of course, he knew full well what the answer was, and I felt as though he was hoping I would grant him a dispensation and make everything all right. First of all, I don’t have the power to grant dispensations, nor does any other human being. Integrity is a highly personal matter. Each individual has the power to embrace it or reject it.

A hundred priests, ministers, and rabbis can forgive you, but all that matters is whether or not you can forgive yourself. There’s only one way to protect your integrity: You must absolutely refuse to compromise it. There is no other method that I know of that works.

What I’m talking about here is how well you practice what you claim to believe in. What you believe in and what you say is one thing; what you do is quite another. I like to think of this consistency of belief, words, and actions as concentricity.

But when the two circles begin to pull apart, it indicates that your integrity is slipping. And when what you do begins to pull too far away from what you believe in and what you say, you may find yourself looking in the mirror one morning and realizing that you’re beginning to dislike and disrespect yourself. At first, you may not be able to figure out why, but if you are sincere about wanting to be the best person you can be, the reason will soon emerge.

That said, I recognize that we are all human and therefore imperfect, thus it’s not possible for your words, thoughts, and actions to be in perfect alignment 100 percent of the time. But that’s precisely why you have to work hard at concentricity every day of your life. It’s the only way you can hope to adhere to your values on a consistent basis.

The temptations to allow those concentricity circles to pull farther and farther apart are everywhere, so it takes a great deal of vigilance and self-discipline to hold them together. The payoff? It’s when concentricity becomes a way of life and doing the right thing comes without even having to think about it.

[Ed Note: Robert Ringer is the author of three #1 bestsellers, two of which have been listed by The New York Times among the 15 best-selling motivational books of all time. Through his books, articles, speeches, and seminars, he has helped more people transform their aspirations and goals into reality than perhaps any other author in history. His articles appear regularly in Early to Rise, A Voice of Sanity, WorldNetDaily, and numerous newspapers nationwide. Gain immediate access to A Dealmaker’s Dream and many bonuses for 66% off here.]
Posted in Family, Self-Improvement, Skill Development
This error message is only visible to WordPress admins