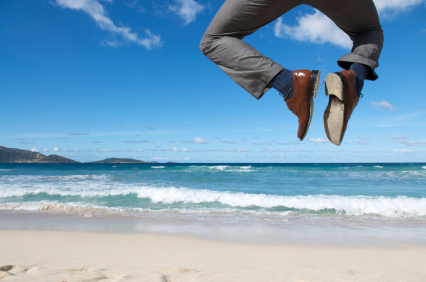 By dictionary definition, joy is “an emotion of great happiness.”  I would be tempted to refer to it as ultimate happiness, but there is no accurate way to quantify either happiness or joy. The truth is that none of us can ever be certain of what constitutes ultimate happiness. Whatever it is, joy seems to invite itself into our lives without warning.

You’ve undoubtedly had at least one experience that you could describe as joy, a moment in time when everything seemed to be just perfect.  Most likely you can recall the day, and possibly even joy’s moment of onset, very clearly, as well as the circumstances surrounding it.

One such experience happened to me in my mid-twenties when I was in the men’s apparel business and spent a lot of time in New York. I didn’t have much money, so I got to know the less trendy parts of Manhattan, Brooklyn, and Queens pretty well.

It was an exciting time — high hopes, eternal youth, and a world of opportunity. Sleep was an occasional distraction, gourmet dining was a corned beef sandwich at a Lower East Side deli. I could not have imagined a more exhilarating activity than walking around Greenwich Village, taking the subway to Sheepshead Bay in Brooklyn, or browsing at Macy’s on 34th Street at a time when only New York could boast of having a Macy’s store.

I usually stayed at the old Prince George Hotel on 28th Street, as it was inexpensive and more than suitable for my needs at the time.  Best of all, there was an automat just across the street, and when it came to dining treats, the automat was just a notch below my favorite deli.

As exciting as those times were for me, I probably did not fully appreciate the magnificence of it all.  There was a feeling of urban spirituality that I certainly will never experience again — first, because I will never again be in my mid-twenties; second, because the world was much younger than today — much more innocent and wholesome.

What I now understand is that I was in a very high state of consciousness, a consciousness that would have been impossible for me to achieve intentionally. In retrospect, I realize that my hyperconscious state was a prerequisite for what was about to happen to me.

It was a beautiful, sunny day in November, and I was driving on the Grand Central Parkway on my way to JFK International Airport. My mind was filled with a thousand and one thoughts about my life, both business and personal.

Then, just as I began to steer my car south onto the Van Wyke Expressway, my entire life seemed to freeze into sharp focus.  It was as though I were being given the means to solve all my business and personal problems simultaneously.  It was an impossible-to-describe feeling that bordered on omniscience.

Instead of having to exert the usual intense mental effort to sort out my thoughts, everything that was of importance to me at the time — perhaps forty or fifty in number — instantly became clearly fixed in my mind in an orderly fashion.

It seemed as though a bright light had suddenly brought my thoughts out of the dark recesses of my subconscious mind and allowed me to consciously focus on all of them at one time.  It was a feeling of immense power, joy, and inner ecstasy.

I cannot recall exactly how long that ecstatic feeling of heightened awareness lasted, but I would guess it was perhaps two or three minutes.  Since that time, I have had similar experiences on a handful of occasions, with each of them lasting only a matter of seconds, but nothing to match the intensity of that unexpected blink of awareness I experienced on my way to JFK Airport.

The most appropriate word I can use to describe these rare moments of heightened awareness is joy — pure joy.  I’ve always wondered why it is so difficult to bring about this joyful feeling, and the best answer I can come up with is that a human being cannot will joy to come forth.  In fact, I think it’s a mistake to pursue joy.  It’s much wiser to practice those principles that lead to joy.

In other words, the best way to pursue joy is to not consciously pursue it at all.  As many people reach their golden years, particularly people of means, they often find themselves asking the age-old question, “Is that all there is?”  Borrowing from Ralph Waldo Emerson, I believe the mistake most people make is to think of happiness as a destination rather than a journey.

Viktor Frankl, the father of logotherapy, referred to this phenomenon as “paradoxical intention,” contending that the more we make something a target, the more likely we are to miss it.  But it’s a bit complicated, because the line between paradoxical intention and laser-like focus on your objective is a fine one.

In short, life itself would not be precious without the reality of death.  As Carl Jung put it, “Even a happy life cannot be without a measure of darkness, and the word ‘happy’ would lose its meaning if it were not balanced by sadness.”

All this is pretty abstract stuff, to be sure, but when those inexplicable moments of a heightened state of awareness make their appearance — and, rest assured, they will — seize those magic moments and focus on what you can do, right now, to take your life to a whole new level.  It works.  Just remember that the heightened-state-of-awareness window closes very fast.

[Ed. Note.  Robert Ringer is the author of three #1 bestsellers, two of which have been listed by The New York Times among the 15 best-selling motivational books of all time. Through his books, articles, speeches, and seminars, he has helped more people transform their aspirations and goals into reality than perhaps any other author in history. His articles appear regularly in Early to Rise, A Voice of Sanity, WorldNetDaily, and numerous newspapers nationwide. Gain immediate access to A Dealmaker’s Dream and many bonuses for 66% off here.