Learning about whole grains may not excite you, but it should — because they might just save your life.

OK, that may sound a bit dramatic, but I’m not kidding. Whole grains are that important. If you’ve been trying to get back on track and lose weight only to get stuck, then you’ll want to hear this. And if you’ve achieved your ideal body weight, then you’ll also want to hear this, because as it turns out, whole grains are the answer to a plethora of health issues, not just fat loss.

You know, carbs seem to be the enemy these days, and have been for a long time, largely thanks to the Atkins diet, which became wildly popular in 2003. Remember that one?

The truth is, carbohydrates are not inherently bad. In fact, you need them for energy.

But it depends on what kind of carbs we’re talking about. Refined carbohydrates in white bread, candy, cookies, sugary cereals, junk foods, and sodas won’t benefit you. In fact, they are horrible for you and should be eliminated — or at least consumed in serious moderation.

The proven problem is that 95 percent of the grains we eat are refined. And refined foods make you fat. If that wasn’t enough, they also increase your risk of heart disease, stroke, and diabetes.

So where’s the good news?

The good news is that if you choose “whole grain” carbs, or “whole wheat” as they are often called, then you can enjoy — without guilt — things like pasta, rice, and other “forbidden” foods. I’m talking REAL whole grains here, not refined carbs in disguise like the ones some big food companies put in front of us at the supermarket. More on that later.

The scientific proof is abundant. Choosing whole grains instead of refined grains will help you maintain a healthy body weight.

What is “whole-wheat” or “whole-grain?”

With that out of the way, let’s focus on what whole grain really is.

All grains are whole grain at first. You see, any grain — like wheat or rice or quinoa — comes with a germ and a bran, which really is and looks like a protective shell for the grain. So whole grain refers to a grain that still has the germ and the bran. A real whole grain means that 100 percent of it (germ, bran and all) has been ground. As a matter of comparison, only about 60 percent of a whole grain is kept in a refined grain. The good, fat-burning part is thrown away! 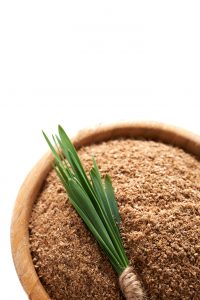 To be fair, that bran is kind of unsightly (it’s brownish), somewhat heavy (baked goods don’t rise as much for instance), and has a coarse texture.

My grandfather told me stories about World War II. He fought the Germans in Northern France, got shot, lost a lung, and was subsequently released from duty. He went back to his family in the South of France.

It was at the end of the war, he said, that he first saw white flour.

American planes would airdrop bags of it to help the Nazi-occupied French population survive rationing.

Before that, most of what they had in France was whole-grain flour, which was much darker in color — brownish, even.

It’s an interesting anecdote that we now take white flour for granted, and that, having realized the benefits of whole grains, began going back to more nutritious, wholesome flours to bake our goods.

It’s much healthier. And it’s the key to losing weight.

You see, refined (white) grains and the foods made from them (white bread, cookies, pastries, pasta, rice, etc.) lack bran. And bran happens to be pure fiber, which as I said before, is your key to weight loss.

In a nutshell (pun intended!), here is how it really happens. White bread and other foods made out of refined grains raise and spike your blood sugar. 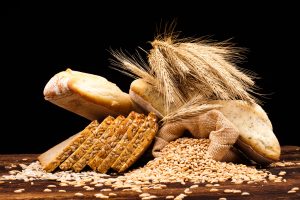 On the other hand, bran is fiber. Fiber decreases the glycemic index. Most of the time, high-fiber foods (like whole-grain foods) have a low glycemic index. Low-glycemic-index foods help you lose weight.

Food items with lots of fiber also make you feel full faster. That too helps with your fat loss efforts, because it prevents you from overeating.

You and I need at least 30 grams of fiber a day. That’s about 10 grams per meal. I don’t count calories, or grams of fiber, and neither should you. Who has the time for that?

But to illustrate how easy it is to get the right amount of fiber while eating foods we love (like bread, rice or pasta), take a look at this chart:

Remember, 10 grams per meal. So eat a whole-grain pasta salad for lunch and a banana, and you’re there.

Studies show that eating whole grains instead of refined grains lowers the risk of many chronic diseases. This is as part of an overall healthy diet. No food, even whole grain, will guarantee good health on its own. A whole-grain cookie is still a cookie.

The benefits of whole grains most documented by repeated studies include:

Need we say more? Whole grains should be a regular part of your diet. And remember: every bit helps!

If you are gluten intolerant or prefer gluten-free

Good news here too. Most grains are gluten free. Barley, couscous, and wheat should be avoided, but other than that, you’re safe with quinoa, oats, farro, teff, and, of course, rice.

One thing you may need to pay attention to… if you are on a gluten-free diet and want to lose weight, then you really should avoid all replacements for wheat flour. Even whole-grain ones. Here is why. You see, to make a gluten-free flour, manufacturers replace wheat flour with other kinds of flours, such as potato starch, rice flour, etc… most of which are very high glycemic foods that will be counterproductive to your weight-loss efforts.

So bottom line: avoid gluten-free wheat flour replacements as much as possible if you’re trying to lose weight.

Over the past couple of years, awareness has increased; a lot of the population has already been switching from white to whole grain. And now, I want you to consider switching to sprouted whole grains for even better — and faster — results.

A sprouted grain falls halfway between the categories of grain and plant. But, thanks to the sprouting process, which breaks down starch, sprouted whole grains have fewer carbohydrates than other grains.

Sprouted grains also have lower amounts of gluten, which makes them more tolerable for those with mild gluten sensitivity.

You can find sprouted whole grains at your supermarket. Most stores now offer sprouted rice, and you will likely find bread made out of sprouted grains, such as Food For Life’s Ezekiel 4:9 Sprouted Whole Grain Bread (which you can find in the frozen foods section).

The benefits of whole grains are just too great to ignore. Especially if you have been under the impression that pasta or rice was totally off limits.

The truth is, you can have your cake and eat it too. All you have to do is switch from refined grains to whole grains.

But don’t worry if you’re new at it or a bit confused, or afraid of making the switch.

Try with easier, delicious food items that are not too different from a refined grain diet. Try Brown Basmati or Brown Jasmine rice, or wild rice and whole-wheat couscous. Switch to real whole-grain pasta, and add one of the fat-burning sauces from my Eat More, Burn More, cookbook, or add lots of vegetables to familiarize yourself with differences in taste and texture (which, by the way, is not a drastic change).

Next, give quinoa, buckwheat, teff, and bulgur a try. These are the superfoods that will really help you lose a ton of weight. 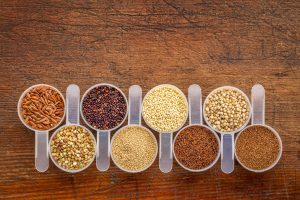 If you usually make a salad with romaine lettuce, cherry tomatoes, red onions, and feta… then try adding a tiny bit of cooked whole wheat couscous, so that you get used to the taste and texture, without it being overwhelming.

One last thing. This whole grain and sprouted trend fits in well with the Mediterranean-inspired diet that influenced my Eat More, Burn More cookbook, so I couldn’t be happier about it. Finally, the world recognizes what has been working for centuries, helping many, many people achieve amazing health and weight results.

You’ll be glad you did. That’s the way to Eat More, Burn More, as I always say.

And please, let me know how you’re doing and how quickly you get started on your way to reaching your weight-loss and health goals.

In part 2 of this series, I share with you the best methods for selecting authentic whole grains and avoiding imposters.

And in part 3, I share my best tips for cooking and preparing them.