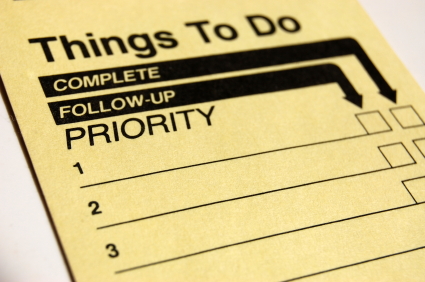 Everything was going according to plan. I was 30 minutes early and the film crew was all ready to go. We had six short scripts to record along with one long PowerPoint-based presentation. I was going to be done early, or so I thought, before, of course, things went wrong. You’ll discover the full story in a moment.

But first, you need to realize that what you’re about to discover is a really simple tip. However, it’s also one of the most important concepts to follow every day, in both your personal and professional life. This simple reminder could mean the difference between success and failure.

Too many business owners make the same mistake that I did that day. They start their day making lists, often affected by what I call “Whiteboard-itis”, where they spend more time organizing and prettying-up their whiteboard (or worse, whiteboard-paint painted walls) with to-dos, and ideas, and grand plans…

…but they never get down to implementing the plan. (Mostly because all of this other stuff is used as a giant procrastination crutch to avoid the REAL work.)

Most people fail to do the #1 most important activity FIRST.

And that’s what happened at the filming session.

When I arrived, the film crew had set up to film the scripts, first (these required a teleprompter and specific arrangement of the lighting and camera). However, the scripts were of the lowest priority. We should have started with the PowerPoint presentation, because it was longer and was due for our Virtual Mastermind members.

The scripted videos were just Youtube experiments and didn’t really matter that much. Still, we started with those. Two hours later, I was running out of mental energy. Filming takes a lot out of me, although with training I’m getting better at this activity that is way outside of my comfort zone.

Then, to make things worse, just as we started with the priority PowerPoint presentation, construction started up just outside the office suite where we were filming. That caused another twenty-minute delay. I fought hard to regain my energy for the video, and we were able to create another fantastic piece of content for Virtual Mastermind members.

However, it would have been much easier if we had done the most important task first. We made a classic mistake. Like most business owners, we fell into the trap of doing the easy, “busy work” first, rather than the tougher priority tasks. But that’s not how you make massive progress in your business. To move ahead, work on your #1 priority first thing when you are mentally fresh and full of energy.

My friend Ryan Lee recently gave a great example of this in an interview. He explained how his sister ran a real estate business in New York City. Competition was fierce and Ryan was trying to help her out. During a consultation, Ryan asked, “What’s the #1 activity your company does that gets more clients?”

Her reply, “Calling the landlords for listings.”

So Ryan asked, “And how many hours do you devote to this each day?”

Her reply, “Usually one or two, but sometimes none because we are so busy with other stuff.”

And THAT is the problem.

Are you “so busy with other stuff” that it prevents you from doing the important work?

When you fail to act on your most important priority first thing you end up paying the price. Other things get in the way. Your mental energy wanes. You set it aside and procrastinate. And you fail to make progress. That’s why you feel like you are struggling.

Business owners get so busy with OTHER stuff that they neglect the most important activity in their business that drives the vital number that they should be obsessively watching. (Matt Smith and I covered this in his interview here.)

Make sure you are doing the #1 most profitable activity FIRST thing in your day. Make sure it gets the necessary time and energy it deserves EVERY day. That’s why I go straight to writing content for 60 minutes EVERY morning.

I wake up and I know what to do. This was decided at 5 p.m. LAST night. Not this morning. (For example, finishing this issue is my most important task today, and that’s why the words are flowing freely onto this page at 5:01 a.m. I’m attacking my most important task when I’m in my most creative state of mind. Email can wait until 2 p.m.)

And yes, this will require sheer will and determination to stay on point when there is a myriad of distractions around you. Even I, at this early hour, want to grab my phone and post this morning’s motivational quotes to my Early to Rise Facebook page. (Fortunately, my old Blackberry has taken such a recent beating with repeated drops to the floor that the internet function no longer works. That’s just another secret technique in my time management routine.)

So I’ve glued my butt to this chair (figuratively, not literally…I’m not willing to go that far…yet) and force myself to get every last word out before my 5 a.m. deadline – when it will be time to move to my next writing priority. You will need to take this approach too. Eliminate distractions and know what needs to get done.

Your to-do list should be made the night before. You should know exactly what you are going to do – and need to do – first thing in the morning.

I truly believe there is something to the idea of having your sub-conscious mind work on your problems overnight…and that’s why you should wake up, get through whatever routines and chores you must do, and then get right to work on letting those thoughts flow freely that have built up during your sleep. You might even want to dictate those thoughts into a recorder or iPhone as soon as you wake up.

That’s how breakthroughs are made – by working on your number one priority first thing in the morning -then moving to your next biggest priority, and so on.

As legend has it, Charles Schwab once paid a consultant, Ivy Lee, for this advice: Make a list of priorities the night before. When you get to work, start with priority one and don’t do anything else until it is finished. Then move to priority two. Don’t work on anything else until that is finished. And so on. Schwab found this advice to be so effective that he paid Lee the handsome sum (at the time) of $25,000 for that simple, yet powerful strategy.

My advice to you is practically free. Work on your number one priority first thing in the day. And don’t let this habit slip slide away. Block the time. Prepare the night before. And attack that #1 most important activity in your business – EVERY day.

[Ed Note: Craig Ballantyne is the editor of Early to Rise (Join him on Facebook here) and the author of Financial Independence Monthly, a complete blueprint to helping you take control of your financial future with a web-based business that you can operate from anywhere in the world – including a coffee shop, your kitchen table, or anywhere around the world where there is Internet access. Discover how you can achieve the American Dream and your financial independence here. You’ve never seen anything like this before.]
Posted in Productivity, Self-Improvement, Time Management
This error message is only visible to WordPress admins