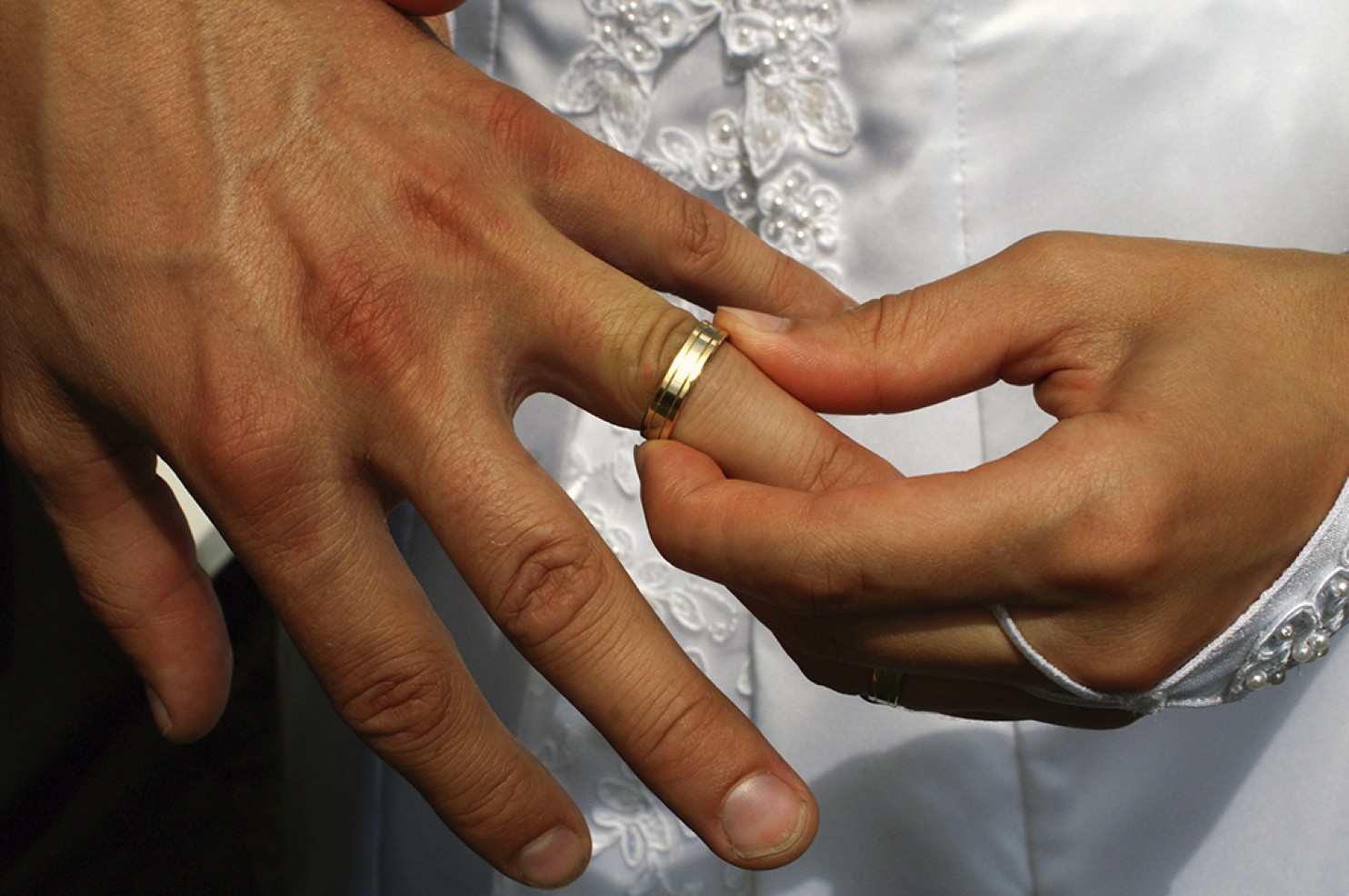 It’s increasingly common these days for young people to regard marriage as “just a piece of paper.” A record share of Americans are postponing or foregoing marriage, and a growing share of young adults think marriage is obsolete or comparatively unimportant.

But Doug Taulbee, a 37-year-old from Maineville, Ohio is not one of those marriage naysayers.

At age 18, Taulbee was content to work a $16,000-a-year job operating a press at a factory in Indiana and live in his parents’ basement. “I really didn’t have a care in the world,” Taulbee said. “I didn’t really have any bills.”

After marrying at 19 and having kids, Taulbee’s perspective changed: “I had to step up and think about something besides myself and start taking care of them.”

Taulbee quit his factory job, joined the Army—where housing and health care for a family were included, and his annual salary jumped to about $24,000—and then sought regular opportunities to get promoted so as to provide a “better lifestyle for them.” Recently, in a bid to further boost his family’s income, he left the Army to work as a finance manager at a car dealership, where he is now pulling in six figures.

Men who are reluctant to settle down until they make more money – and women who spurn low-wage men – could benefit from what Taulbee has discovered: Marriage has a transformative effect on adult behavior, emotional health, and financial well-being—particularly for men. (Parenthood is more transformative for women.)

Men who get married work harder and more strategically, and earn more money than their single peers from similar backgrounds. Marriage also transforms men’s social worlds; they spend less time with friends and more time with family; they also go to bars less and to church more. In the provocative words of Nobel Laureate George Akerlof, men “settle down when they get married; if they fail to get married they fail to settle down.”

Research findings on heterosexual marriage are surprisingly consistent with Akerlof’s insight, especially when it comes to engaging the world of work.
Our research, featured in a recent report, “For Richer, For Poorer: How Family Structures Economic Success in America,” indicates that men who are married work about 400 hours more per year than their single peers with equivalent backgrounds. They also work more strategically: one Harvard study found that married men were much less likely than their single peers to quit their current job unless they had lined up another job.

That’s even after controlling for differences in education, race, ethnicity, regional unemployment, and scores on a test of general knowledge. What’s more: the marriage premium operates for black, Hispanic, and less-educated men in much the same way as it does for men in general.

For instance, men with a high-school degree or less make at least $17,000 more than their single peers.

Why is there such a substantial marriage premium? Could it simply be that the kind of men who get and stay married have certain characteristics? Perhaps the marrying kind is more charming, hard-working, or ambitious.

And yet the research suggests at least part of the marriage premium is causal: one study showed gains at work when men are married compared to when the same men were not married and another study of twins found that married twins earned 26 percent more than their identical twins who were not married.

Some worry that what we’re really saying is that it is wives’ job to make their men better. But the reality is much more complex.

Here are some of the ways marriage appears to transform men’s approach to work and the way employers treat them.

1. After marrying, men assume a new identity. Marriage is one of the last “rite[s] of passage into manhood” remaining in our society, argues sociologist Steven Nock in Marriage in Men’s Lives. He found that marriage engenders an ethic of familial responsibility among men, as well as a new-found sense of meaning and status in the world. Marriage also encourages men to take their role as providers seriously.
2. Married men are motivated to maximize their income. For many men, this responsibility ethic translates into a different orientation toward work, more hours, and more strategic work choices. Sociologist Elizabeth Gorman finds that married men are more likely to value higher-paying jobs than their single peers.

This is partly why studies find that men increase their work hours after marrying and reduce their hours after divorcing. It’s also why married men are less likely to quit a current job without finding a new job. Indeed, they are also less likely to be fired than their single peers.

3. Married men benefit from the advice and encouragement of their wives. Although there is less research on this, we suspect that men also work harder and more strategically because they are encouraged to do so by their wives, who have an obvious interest in their success. One study appears to buttress this point, finding that men with better-educated wives earn more, even after controlling for their own education.

4. Employers like married men with children. There is evidence that employers prefer and promote men who are married with children, especially compared to their childless male peers and to mothers. Married men are often seen as more responsible and dedicated workers and are rewarded with more opportunities by employers. While illegal bias and long-held stereotypes appear to play a role in this historic preference, it nonetheless helps explain why married family men get paid more.

The benefits of marriage for men no longer exact as high a price on women in the workplace, however.

Childless women also receive a marriage premium today. And though married mothers still earn significantly less than do married fathers, a new study finds that the motherhood penalty is now lower for married women than it is for never-married women, probably because married moms have more support at home in raising children. So for modern women, there’s a motherhood rather than a marriage penalty.
The tragedy is, for all the good news we keep learning about the benefits of marriage, the institution is in retreat, especially among poor and working-class Americans. In other words, in America today, there aren’t enough men who’ve had Doug Taulbee’s transformative experience.

W. Bradford Wilcox directs the National Marriage Project at the University of Virginia and serves as a visiting scholar at the American Enterprise Institute and a senior fellow at the Institute for Family Studies. This story is based on research Wilcox did with Robert Lerman, Institute Fellow at Urban Institute and Professor of Economics at American University.

Posted in Motivation, Productivity, Work
This error message is only visible to WordPress admins