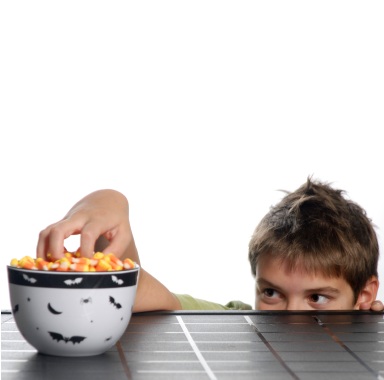 As a child, I spent every Sunday morning at First St. John’s Lutheran Church. Each week, our family would go through the same routine. It started with a bath, followed by my mom painfully combing the ‘tangles’ out of my naturally curly hair. She’d then dress me in my Sunday best, and my uncle would pick me up at 9am sharp for pre-church Sunday School that was held in the church basement.

At 11am, my sister and I would head upstairs and join my mother in the third pew from the back on the left hand-side. That’s where we sat every Sunday morning for over two decades. As I grew older, I developed the discipline to sit through the hour-long service without misbehaving. However, as a six-year old boy anxious to get home to his baseball bats and hockey sticks, getting me to sit still for sixty minutes (and seventy-five minutes during the once per month communion Sunday service) was a difficult task.

My mother’s solution to this problem was candy. It’s a pretty good answer to any six-year-old’s problems, I imagine. After about twenty minutes of the service, when ennui began to set in for my sister and I, she brought out rolls of sweet tarts for each of us.

And here’s where I learned a valuable habit that has helped me succeed in life.

I made it my mission every Sunday morning to hold out longer than my sister before eating the candy. Some weeks I’d hide my candy, pretending I’d eaten it, and then, when I knew my sister was done with hers, I’d produce my sweet tarts from my pocket and take great pleasure in eating the tiny candy pieces in front of her. On other occasions, it would be a straight-up battle of wills as we both played with our candy in an attempt to see who could go the longest without eating it.

What I discovered on those Sunday mornings was the power of delayed gratification. As a young boy in church, I used this skill to “win” at the candy game with my sister. As a teenager, I put this power to use by forcing myself to go to my after-school job, then to the gym to lift weights, and then home to do homework, all before going out with my friends.

In my college years – excluding my freshman year where I let the habit slide – I used delayed gratification to put schoolwork first over late night partying. This way, I’d end up on the Dean’s Honour List three years in a row – and eventually win a scholarship that paid for my time in graduate school. I still remember the Friday nights spent in the lab finishing up my research projects until 10pm before finally rushing out to meet my friends at a house party.

The power of delayed gratification is, in fact, a research-proven phenomenon. There’s a famous study that was performed at Stanford University, the kind you’d read about in a Malcolm Gladwell-esque business book, known as the “Stanford Marshmallow Experiment”.

In the study, researchers tracked a group of four-year-old children, each of whom was given a marshmallow and instructed to wait twenty minutes before eating it. The children were then monitored for their developmental progress into adolescence. The scientists, led by Professor Walter Mischel, discovered that the children that were better able to wait to eat the marshmallow—delaying gratification—were generally more dependable and achieved greater scores in their Scholastic Aptitude Tests.

Substitute a church pew for a Stanford University research lab and sweet tarts for marshmallows, and you can see the personal connection I have with this research.

But I don’t believe that the ability to delay gratification is something that you must be born with. Instead, it’s a powerful habit you can build. However, it seems that most people (from the Boomer Generation to the much-maligned Millennial Generation) have missed this lesson. Instead, too many people spend their paychecks when they get them – or even before. As a result, they get deep into debt. They want it all. And they want it now. But that’s not how it works if you want to be successful.

Work comes first. Then reward. It’s not the other way around.

No matter where you’ve stood in the past on this success equation, you can change. Just like we can all learn to get up earlier, make exercise a daily habit, or improve our diet, you too can build the habit of delayed gratification. The rockstar Sting even suggests we can learn delayed gratification for the benefit of tantric sex, but that’s another article for another day, I suppose.

Here’s an easy place for you to start working on developing your power of delayed gratification. It’s your email inbox. You and I will surely both agree that if you can avoid getting sucked into your email each morning that you’ll be able to get more done each day. So do it. Just delay it. Wait one more minute each day before opening your inbox and checking that first email.

I learned to do this and started my progression back in the summer of 2007. Up until that point, I was an email “first thing in the morning” person. I rolled out of bed and practically right into the chair at my computer (it helped that I was living in a 400 square foot bachelor apartment at the time). Some days, I didn’t even have to roll out of bed. I was able to check my email on my Blackberry while my head was still on the pillow.

Over time I worked to decrease my dependency on morning messages. First, I stopped all email from being sent to my inappropriately named “smart phone” (as it wasn’t making me any smarter at all). Next, I began the habit of walking the dog and then writing for just fifteen minutes before checking my email. Slowly the fifteen minutes blossomed into thirty, expanded into sixty, and has grown into a magic five hours of productive time before I finally check my email in the morning.

Struggles will come first. But you must look at the work and the struggles as blessings. Practice (i.e. training) is the only way you can build up your delayed gratification muscle and with it the benefits you’ll get in many areas of your life.

Like running hills or squatting weights, it’s going to be hard at first, but you will come to appreciate your new power of habit. The rewards are well worth it.

Mastery takes time. But mastery is worth the effort.

You can do it. You will do it.