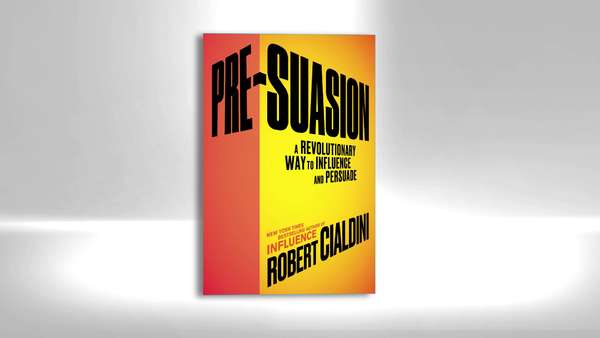 Everyone is talking about Apple’s keynote this week.

While the critics are losing their minds over the jack-less new iPhone 7, I’ve been more excited about the release of a new book by, arguably, the most persuasive man in the world.

The book is called Pre-suasion and the author is Robert Cialdini. Pre-suasion is the sequel to Cialdini’s monster hit Influence which he published 30 years ago.

When Forbes caught up with Cialdini to ask him why he waited 30 years before publishing his next book, here’s what Cialdini said (Apple take note):

“The truth is I never had an idea big enough to compete with Influence. I didn’t want to plant a set of bushes around the tree that is Influence. I wanted to wait until I had a seed for another tree, which finally arrived as Pre-suasion. As opposed to Influence, which covers what best to build into a message to get agreement, Pre-suasion describes the process of gaining agreement with a message before it’s been sent.”

Pre-suasion is about making the sale before you ask for the sale. (Editor’s note: the “sale” can be any form of agreement or compliance.)

In the same interview with Forbes, Cialdini was asked for his top 3 pieces of career advice. I recommend you read the full interview since Cialdini shares a killer tip on negotiating a promotion that I haven’t included here. But I figured it would be criminal if I didn’t at least give you Cialdini’s 3 pieces of career advice (#1 is **Italian chef kissing fingers gesture** – hat tip to Amanda Rosenberg for that visual).

Forbes: What are your top three pieces of career advice?

1.     When interviewing for a new job in front of an evaluator or team of evaluators, after saying that you want to answer all questions as fully as possible, say one more thing: “But, before we start, I wonder if you could answer a question for me. Why did you invite me to interview today?”  As a consequence, your evaluators will hear themselves saying positive things about you and your qualifications, putting themselves in a state of mind that is favorable to your candidacy before you make your case for it. I have an acquaintance who swears he has gotten three better jobs in a row by employing this pre-suasive technique.

2.     Don’t have a favorite influence approach that you use characteristically. I have a friend who is a Marketing professor and who set out the find the single most effective tactic of influence, the one that would work across the greatest number of settings and audiences. I saw him at a conference not long after he ended his search, and he told me, “Bob, I found it: The single best influence approach is not to have a single best influence approach.” I couldn’t agree more. Each situation has to be treated differently, depending on which approach is most suited to the circumstances.

3.     Ask your boss for advice concerning your planned work, not for opinions or expectations regarding it. It turns out that evaluators who are asked to provide advice (versus opinions or expectations) on a plan are put in a cooperative state of mind before they even experience the plan, which makes them more favorable to it when they then do encounter it. There’s a saying, “When we ask for advice, we are usually looking for an accomplice.” I’d only add on the basis of scientific evidence that, if we get that advice, we usually get that accomplice. And what better abettor to have on a project than someone in charge?