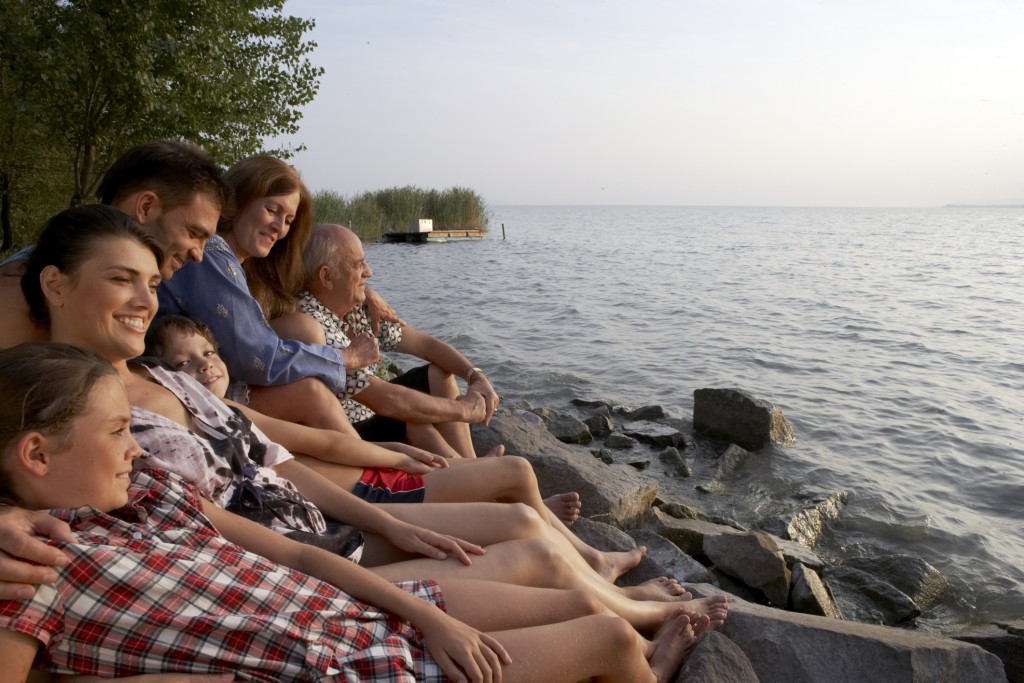 As Carter was packing up to leave his parents’ house after a weeklong visit with his wife and kids, his mom called to him from the kitchen. “Are you sure you checked your room to make sure you didn’t forget anything? You always leave something behind.”

From the bedroom Carter rolled his eyes, gave his wife a frustrated look and hollered back: “Yes, Mom! I think we’ve got it all.”

It had been a nice visit. The grandkids loved spending time with their doting grandparents. Why did Mom have to spoil it at the end by making Carter feel like an irresponsible, forgetful child?

This one simple question by Mom reminded Carter that she had always considered him forgetful, implying that she wasn’t confident he could take care of himself – not even now, as an adult.

She hadn’t made him feel nurtured as a boy and she didn’t do it when he became an adult either.

The more you nurture your adult children, the more you develop trust and reliability with them. But over time, the air can get cloudy. Small problems can begin to chip away at what was once a solid foundation.

Just as in any relationship, keeping the ties with your children tight and sound requires work. It’s a lifelong process.

Let me share with you five important ways you can nurture your adult children throughout their lives and help them feel good about themselves while also strengthening the family bonds.

More than anything, adult children want to know that their parents have confidence in them. The most nurturing things you can say or do are those that let your kids know you believe in them.

Since they were young children, they’ve been trying to prove to you that they can handle things on their own.

They want to demonstrate to you that they can make good decisions and live responsibly.

When you question them or throw doubt on their behaviors, it doesn’t come across to them as a concern for their well-being. Rather, it feels like a comment about a deficit in who they are.

Soon after Carter’s visit home, I talked with him about the dynamics between him and his parents. He knew they loved him dearly. They valued family time together. They talked often on the phone and shared events of their lives. His parents had loaned him money to begin his own business, and they had created an estate plan that would leave their assets to him and his siblings after they died.

In spite of his parents’ care and concern, Carter didn’t feel nurtured by them. Their loving gestures were overshadowed by their subtle but constant remarks about his inadequacies.

Carter conceded that these comments were never meant to hurt him. Their intentions were good. The comments came more from habit than from their desire to make a point or to change him. Yet, they always felt demeaning and belittling to Carter. Even at 40 he still believed they had very little confidence in him.

The concept of nurturing your kids may grow fuzzy as they grow older. Yet they appreciate it as much at 40 as they did at 14. You still have a huge impact on your kids’ self-esteem, even though they may already have children of their own.

Some years ago when James was in his 20s, he went through a tough time – experiencing deep depression and emotional distress. He called home to ask his parents for help, but they were too busy to fly out to meet him where he lived. Instead, they went to a board meeting 1,000 miles in the other direction. After that, James never trusted his parents to support him.

In contrast, I will never forget my own divorce many years ago. When I called my parents to tell them my sad news, they jumped on a plane and came to my home to spend a week with me.

I knew how disappointed they must have been. I was the only person in their circle of family and friends to get a divorce. But they were able to separate me from my behavior.

Even though they may have had a negative opinion about what I was doing, their judgment never spilled over onto who I was. They continued to love me unconditionally.

They didn’t lecture me or tell me what to do. They were simply there for me. I will always remember their loving act of kindness and support to me when I was down and out.

Your kids never grow too old for your support. When you let them know, verbally and in your behaviors, that you will drop what you’re doing and go to them when they’re in need, they know you’re on their side.

Listening is always the better part of communication.

Even when your children are young, they want to know that they are heard. When they are adults, it’s even more important.

Yet, listening to their opinions is more helpful than giving advice. They feel nurtured when you listen because it is respectful. It lets them know you believe they are competent to think things through and make their own decisions.

Your children are usually capable of coming up with their own answers. Sometimes they just need to verbalize their deliberations, and they appreciate an understanding and sensitive ear to hear them out.

From time to time in my psychotherapy practice I have had clients who were grieving the death of a loved one. It was the most difficult kind of counseling for me because there was no way to fix things. I felt helpless because I couldn’t say or do anything to change their situation. Often I simply listened and cried with them. At the end of the session, these clients would frequently give me a hug and thank me for helping them. Of course, I had said very little. It taught me a great lesson in the power of listening – how nurturing, helpful and healing it can be.

4) Spending Time with Them

Baxter recently told me that he visits his parents every year at their summer home. He’s a great tennis player, and so is his dad. But his dad rarely plays with him, preferring to play with the tennis pro at the club instead. Baxter feels hurt that it’s still all about his dad – improving his game and getting the most out of his time on the court – rather than being with Baxter.

It reminds Baxter that, even though he was a great athlete in high school, his dad only threw a football with him one time ever. His dad was too busy to waste his time in the backyard with his son. Baxter didn’t feel nurtured then, and he still doesn’t.

Make your time spent with your kids about them, not about you. Don’t be afraid to go onto their turf, doing activities they enjoy even when you know nothing about those activities. Entering their world lets them know that their interests matter to you. It gives them the message that you respect them and really want to know who they are and what makes them tick.

Find ways to focus on each one of your adult children, being careful not to neglect one even though another requires special attention. Being ignored never makes anyone feel nurtured.

Spending time with your adult kids (one on one whenever possible) is still one of the overall best ways to tell them how much you value them and how much you just plain like them.

At 25 years old Katrina didn’t drink or use drugs. One day she was on the ski lift with some friends who were smoking pot. In a moment of weakness, she took a few hits and got high. She bummed a ride home with her friends at the end of the day and totally forgot she had parked her car in the lot at the bottom of the slopes.

By the next day her car had been towed to an impound lot. Katrina’s mom rushed to the lot, paid the fine and took the car home. In taking care of Katrina’s problem for her, her mom totally eradicated the consequences of Katrina’s behavior and robbed her of the lesson she could have learned from her mistake.

Even worse, Katrina’s mom gave her a message that she didn’t believe Katrina could handle her own affairs.

“Helicopter parents,” who do everything for their kids and make sure they never fail, are detrimental to their children’s growth and development. It’s not helpful in the long run when you write your kids’ high school essays for them or demand that the coach put them on the first string.

And it’s not healthy for you to bail out an adult child either.

Even if you see your son or daughter in a bad relationship, don’t interfere. A client once told me that she learned more from being in an unhealthy relationship for a few months than she would have learned if she had read a dozen books and gone to therapy for a year. From the lessons she learned, she later chose a husband who is loyal, devoted and treats her like a queen.

This does not mean you cannot talk to your adult children. After all, that’s one of the main reasons you’ve spent so much time throughout their lives developing and growing a strong, positive relationship. There are times when you can certainly share with them your concern and your wisdom – sensitively and gently.

But you simply cannot make the decisions for them. If they make a bad choice and marry the wrong person, buy the wrong car or follow the wrong career, it’s still your job to respect their decision and be there to support them on the other end.

Allowing your kids to rise and fall on their own lets them know you believe they are self-reliant and capable. Be there for them. But give them the opportunity to fix their own blunders. It tells them that you can count on them to take good care of themselves.

The Hardest Job on Earth

No one ever said it would be easy. Ironically, studies show that children make parents slightly less happy than they would otherwise have been without them. Yet, parental relationships bring great happiness into the lives of children.

So your efforts are not in vain. You are appreciated for what you do with your kids.

It’s a huge responsibility to raise a family and to become the matriarch or patriarch of an entire clan.

Your relationships with your children spill over to your grandchildren and affect the well-being and harmony of your entire family.

Your relationships establish the basis for your family culture and the legacy you will leave behind. How well you nurture your children has a lasting consequence far into the future.

[Ed Note: Dr. Joanne Stern’s important family advice is part of the Bonner Family Office.  The Family Office is designed to give high net worth families the help they need to ensure their wealth lasts for many generations to come.  Right now you can get full access to the Bonner Family Office for a fraction of the price when you take advantage of their once a year Open House.  Plus, you’ll also be able to join them at the Family Workshop in Nicaragua next February. See full details here.]
Posted in Family, Lifestyle
This error message is only visible to WordPress admins