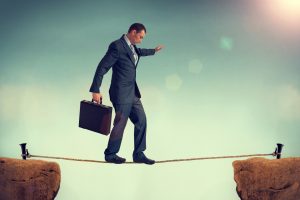 How we can fear speaking in front of a crowd more than those creepy little eight-legged monsters I’m not sure, but that’s one man’s opinion.

Most of us are not surprised when we hear that statistic. We actually fear discomfort (e.g. public speaking) just as much as we fear death itself. For prehistoric man, comfort meant safety and safety meant survival.

Fortunately, most of us are not too concerned with survival anymore, but we’re still hardwired with an addiction to comfort. And giving into this addiction may be the one thing preventing you from getting where you really want to be in life.

Jim Rohn once said, “If you want to have more, you have to become more.” To become more you must grow, and to grow you must get outside your comfort zone.

To Succeed You Must Make It a Habit to Get Comfortable Being Uncomfortable.

The first time I spoke in front of a large audience was in 2009. I nominated myself as the MC for a gala at UCLA with over 2,000 attendees. What an idiot.

For three hours leading up to the event, I thought I was having a heart attack: shallow breathing, tingling limbs, all the fun stuff. By the time I was ready to head onstage, I had already sweated through two shirts and could barely speak English.

GREAT, this is how I die: death by glossophobia, I thought.

Somehow, I found the strength to drag myself out in front of the crowd and… it turned out to be an amazing event.

See, the first 15 minutes were very new to me — and terrifying. I had never spoken in front of a group larger than 50 people before, so I didn’t know what would happen. Where should I stand? How will people react to my jokes? What do I do with my hands?

But something happened halfway through the three-hour Gala. The unfamiliar became familiar. The uncomfortable became comfortable. When I went out on stage for the second half, I knew exactly what to expect.

I had spoken in front of thousands of people before. I had done it for the past 90 minutes. I knew where to stand, I knew how people would react to my jokes, and I knew exactly what to do with my hands.

For most of us, being uncomfortable is merely a result of exposure to the unfamiliar.

What happens when you make the unfamiliar familiar? It becomes comfortable.

Because of my willingness to get uncomfortable, I have now spoken in front of C-level executives at numerous Fortune 100 companies, a handful of government officials, and even high-ranking military personnel. And what’s even better: I am confident I could do any combination of the above again, because it’s now familiar to me.

The world presents you with opportunities to grow and be successful every day, but most of us shy away. But you need to resist the urge to stay comfortable, because the day you are willing to get uncomfortable is the day you start becoming truly successful.

As the famous memoirist Anais Nin noted, “life shrinks or expands in proportion to one’s courage,” to brave the unknown.

There are three steps to mastering the habit of getting comfortable being uncomfortable:

1. Do some smaller, unfamiliar tasks daily; they make the big stuff less daunting. Even the little stuff can be scary, but trust that it’s not going to kill you. You might actually like it. A couple things you can try include:

2. Talk about your discomfort with other people. This act itself can be a bit uncomfortable, but it works. We always think we are the only person who has a certain fear or anxiety. After working with hundreds of people as a Certified Success Coach, I can honestly say that we all have the same base fears — all of us. Talking about that discomfort with people will help you realize that you’re not in it alone, and getting social support will give you the courage to feel your fears and act anyway.

3. Journal about the process. I won’t lie, intentionally doing things you’re uncomfortable with can cause some emotional stress. It’s not easy so it’s important to understand that the process is normal and that stress actually creates growth. When I’m going through large spurts of growth and discomfort, I journal. Most of it is incoherent nonsense, but the act of writing allows you to work through your own emotions and understand your fears. Journaling often takes my anxiety from an 8 out of 10, down to a 3 or 4.

If you feel like more of us need help getting out of our comfort zones, please like and share this article below. Don’t forget to leave a comment with any ideas you have to help others get comfortable being uncomfortable.

Zander Fryer is a former IT Account Executive turned success coach and entrepreneurial consultant. As the Founder and CEO of Sh*t You Don't Learn in College he helps entrepreneurs turn their knowledge, expertise, and passion into six-figure businesses, so they can make the money they want while doing what they love. He recently co-authored his first best selling book, "Mastering the Art of Success," with N.Y. Times #1 best-seller Jack Canfield.