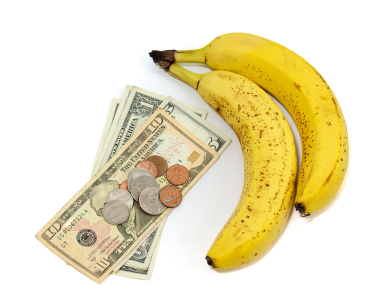 I guess it’s natural to not want to try something new. But sometimes trying something new will get you hooked on something much, much better.

For me, it was this really exotic fruit that I had never heard of before.

I was almost six years old when my pops decided that it was time for us to defect from communist Armenia (then governed by the soviet union) and come to America where we’d live a life of freedom and opportunity.

I didn’t have much say about leaving Armenia and coming to the U.S., my pops decided that communism wasn’t for us, bribed the local soviet consulate to let us out, and we were in a plane and off to Italy and ultimately to the United States.

Although at that age I didn’t really know the difference between freedom and oppression.

Ah, the innocence of being a child…

Now, as a kid in Armenia my eating habits were sorta regular… pretty much the same three things that my mom put in front of me… stale bread, cheese, and cured deli meats (not the quality kind, but the kind that could survive a nuclear winter).

Once in Italy I was exposed to a whole bunch of other foods that I had never seen before. One of the new things I was introduced to was a strange and exotic fruit called a ba-na-na. I had never eaten one, seen one, or heard of this thing they call a “banana”.

Each morning my pops would go down to the fruit stand and buy a few bananas for the family to eat. All these new and exciting foods were available to us in Italy and I refused to eat any of it.

I wanted what I was used to eating.

One morning I reluctantly tried a bite of the banana that pops had purchased from the fruit stand.

See at the time, we were staying in a crappy hotel in Italy waiting for our paper work to go through so that we could fly to America. My pops did everything by the book. He didn’t want us to illegally enter the United States so we stayed in Italy for ten days while our defection papers were being processed.

In fact, when we arrived in New York, and then finally moved to California, my pop made sure that we didn’t live in North Hollywood or Glendale (suburbs of Los Angeles) because there were large populations of Armenians there.

While you’d think that living in those heavily Armenian populated cities would be where he’d want us to move to. My pops moved us to Anaheim instead. I’m pretty sure that we were the only Armenians in all of Orange County.

According to my pops this forced us to assimilate into the culture. He was right, and today I really appreciate that he made that decision.

Thinking back… I can say that my father was a maverick. He made sure that we never took government assistance. No welfare. No food stamps. No medi-cal (state sponsored medical assistance). No section 8 housing.

Pops made sure that we made it all on our own. After all, just being in America was privilege enough for us.

Now you’re probably wondering what any of this has to do
with bananas… not much. I clearly digressed in my story telling.

Back to trying something new…

So I finally tried the banana. And wouldn’t you know it?

Within minutes I had eaten what was left of my mom’s, brother’s, sister’s, and pop’s bananas. The benefits of being the “baby” in the family I guess.

I’m glad I was open-minded enough and tried the banana. Otherwise I would have missed out on one of nature’s most perfect foods.

It’s the same way in your business, too.

Everything that you know and have done has gotten you where you are today. You don’t really know what you haven’t tried.

If you don’t try something new, you may end up missing out on that big breakthrough that you could of had which could have taken your business to the next level.

[Ed. Note. Bedros Keuilian is the embodiment of the American Dream. Arriving in the United States from the communist Soviet Union back in 1980, his family went from being broke to eventually adding value to their new community. Today, Bedros helps over 45,000 fitness experts grow their businesses.  Bedros knows the American Dream is NOT dead, because he is living it right now. So are the folks in this inspiring video – watch it now.]
Posted in Health, Motivation, Nutrition, Self-Improvement
This error message is only visible to WordPress admins