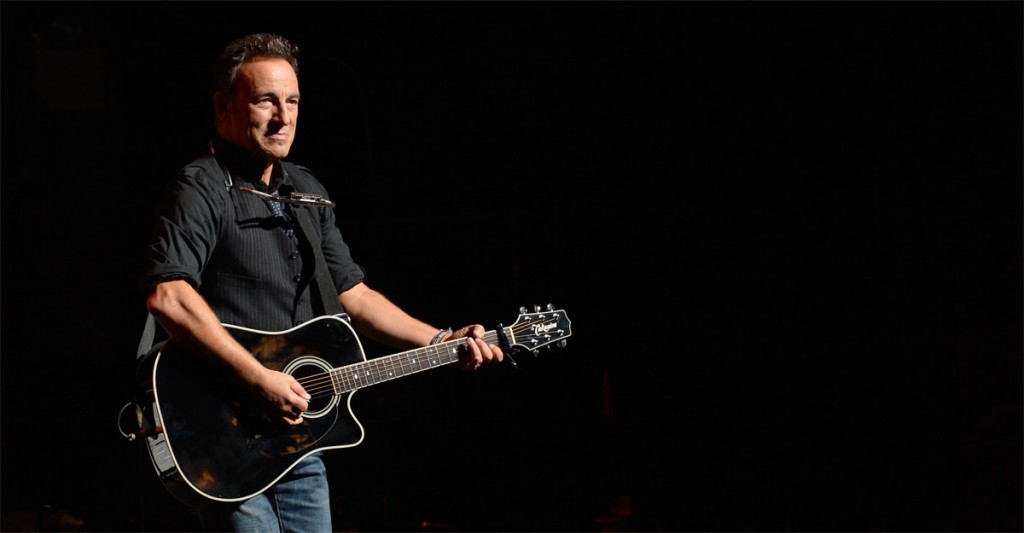 “You can’t start a fire.

You can’t start a fire without a spark.”

Healthy Living Heavy Lifting: Monday lunchtime, and I was driving home after seeing a client. Windows down, cruising along, and belting my lungs out in time with The Boss.

This line came on, and I stopped. (My singing, not my driving.)

It suddenly hit me – THIS is what reaching your fat loss goals is all about – getting that spark.

How many times have you heard a friend or colleague tell you that they’re going to start their diet next week?

The new week rolls in, and what do they do?

Do they get up, make themselves a veggie omelette, drink a black coffee, prep some food for lunchtime, walk to the office, then hit the gym on the way home before relaxing with a nice, tasty diet-friendly meal?

They think – “eurgh, It’s Monday. I can’t be doing with this,” before grabbing their Red Bull and Snickers, plonking themselves in the car to make the 3-minute drive to work, to sit in front of their computer for 8 hours, breaking only to grab a sandwich, chocolate bar and a latte, then drive home, sit down all evening, and indulge in enough calories to keep a herd of elephants going for a month.

Many even DECIDE to make a positive change.

They might go out on Sunday to do a whole food shop for the week, avoiding their previous vices, and getting only foods that fit their diet.

They actually sign up for the gym and have an induction, buy themselves a new workout wardrobe and promise themselves that this time, things will be different, they will follow through and achieve their goals. 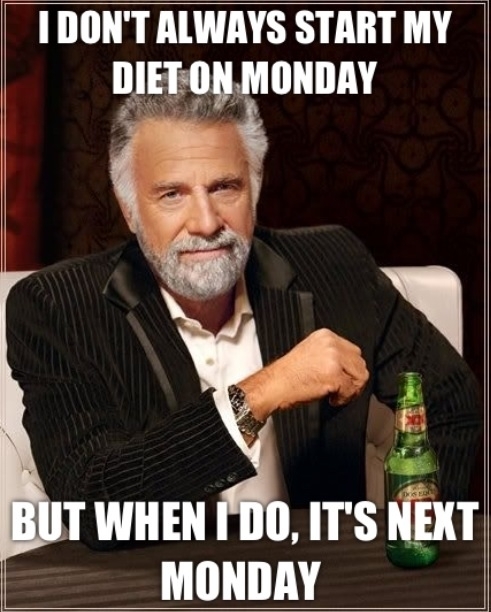 But pretty soon, it’s back to the old routine of TV and takeaways, not treadmills and tracking calories.

Your Goals Are Too Big

Everyone wants to be perfect.

I’ve lost count of the number of client consultations I’ve done where guys tell me they want to look like Lazar Angelov, Greg Plitt or even actors like Ryan Reynolds and Hugh Jackman.

Forget the fact these guys have different genetics, the average Joe in the street just doesn’t take into account that the models and bodybuilders make a living off this dream physique, therefore, reaching this level of fitness and body composition just might not be possible for them.

And ladies are even worse.

They want Beyonce’s calves, Kylie’s glutes and Jamie Eason’s abs. (And so do I, but that’s a story for another day.)

Don’t worry – we’re getting back to Bruce, give it time.

From Zero to Hero 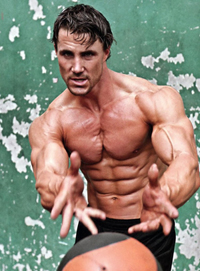 Considering the average person has so many poor habits in terms of diet, exercise and lifestyle, making the jump to suddenly having 5% body fat, attaining inhuman levels of strength and fitness or looking like the celebrities we all admire so simply isn’t feasible.

It’s like trying to start the mother of all fires without even having a spark.

These guys and girls with the Adonis physiques have their routines nailed down.

They know how to track their food intake and manipulate everything depending on progress. They know what foods sit well with them, what makes them perform best, and how to tweak their training for maximum results.

If you’re coming from the point of not knowing what a macronutrient is, or how to perform a press-up, there’s no point in trying to suddenly hit 200 grams of protein, 60 grams of fat and 180 grams of carbs per day, or jumping into a specialist semi-over-reaching mesocycle to boost your bench press.

And this is what puts people off from starting

The Fear of Failure

It can be overwhelming when you see what the people at the top level do to maintain where they are.

So overwhelming in fact, that you’re put off from even starting.

Your goal of being like them seems so far off, that you fail even to take a single step towards it.

It’s that all or nothing approach – you feel that you want to conquer your ultimate goals with a click of your fingers. Unfortunately though, it just doesn’t happen like that.

One day you can have that fire, but first you need a spark.

Q. So how do we make that first spark, that leads into a second, then a third, then starts to burn a little brighter before being a blazing inferno?

A. Small steps and attainable goals.

Yep, it’s not some super sexy trick on how to quickly lose 10 lbs of fat, or to double your squat max, we’re going back to basics and talking goal setting.

Let’s take our example from earlier –

We have a guy (let’s call him Gary) who wakes up on Monday morning, and feels unmotivated. Gary probably hits snooze several times before grabbing that Red Bull and Snickers.

There we go – we have our first goal, our first spark if you will.

Within a few minutes of the day starting, we can see where Gary can make a positive change.

Why not, instead of getting a caffeine and sugar-filled energy drink and something with little nutrient-density that will likely leave him feeling even worse in a few hours, get something a bit more conducive to fat loss?

Gary could make himself a coffee (he’s still getting his caffeine that way, but without a load of empty calories) and have a protein flapjack.

Suddenly, he’s gone from a pretty poor breakfast (although I will admit being partial to a Snickers myself) to a meal that keeps him feeling fuller, still gives him energy from the caffeine and carbs, but gets some protein and fibre into him too.

As Gary’s coach, that’s all I’d want him to do for a week.

What he does the rest of the day is up to him – if he still wants to drink lattes and Lucozade at work, and do bugger all when he gets home, I don’t mind, as long as he sticks to his breakfast habit.

Despite only asking Gary to make this one tiny change, I’d expect Gary would actually do a lot more.

See, when we start making healthy sparks, it triggers something in us.

I’d wager a lot of money that Gary would get to work and feel more productive. Instead of slumping at his desk, he’d think “right, what can I get done today?”

Lunchtime rolls around, and invigorated by his healthy start, Gary may well head out for a walk and buy a salad from the local deli, rather than having a pasty or sausage roll from the work canteen.

Mid-afternoon he might succumb to temptation and eat a doughnut or go back on his energy drinks. But d’you know what?

As long as tomorrow, he gets up, has his coffee and protein bar instead of the Red Bull and Snickers, I’m okay with that.

The key to building your fire is to keep making sparks.

First up though, we need to make sure that first spark catches light. To get that to happen, Gary needs to keep his breakfast “habit” going.

“Habit” is crucial. Once something becomes habitual, it’s ingrained, and you can build on it. Just think about it the other way with a bad habit – picking your nose.

If you were a nose picker (thumb suckers and nail biters take note of this too) how many times did you have to be told to stop doing it before you eventually gave up? In some cases, it’s so habitual, you still see grown men and women doing it now.

It’s the same for good habits – do it consistently, and eventually, it’ll become so second nature it’s almost impossible to break.

There’s no point doing something for one day, or even one week if it’s not going to last.

Successful people have habits that they stick to day in, day out. Whether that’s in business, life or fat loss.

A Series of Sparks

Let’s take a look at what Gary could do in the coming weeks:

– Week 2 – Stop hitting snooze on the alarm so he gets up 10 minutes early, giving him time to walk to work.

– Week 4 – Start tracking his food intake, either by using MyFitnessPal or making a picture journal of all his meals.

– Week 5 – Make sure every evening meal has a source of lean protein in.

In week 6, something could crop up – a family emergency or his workload could go through the roof for instance, and Gary regresses, occasionally skipping breakfast, or just getting a takeaway in the evenings.

No biggie – those sparks are still burning, just not as brightly. All Gary needs to do is repeat his previous week.

Back to the Boss

It’s amazing just how quickly all these sparks build up.

Just like a fire, the more you add to it, the quicker it grows.

8 weeks down the line, and Gary might have lost a stone. He never once made this one of his actionable goals, and had he done so, he’d likely have taken on too much, become overwhelmed and failed. That fire wouldn’t even have started.

These sparks have a cumulative effect though, and they are essential for reaching your goals.

The Boss is right – you just can’t start a fire without a spark.

And you thought I was going to write about “Born to Run.”