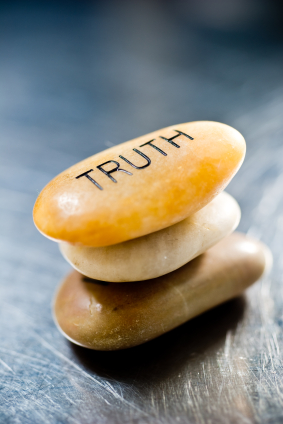 I say search rather than find, because to find truth in the broadest sense of the word would mean that one would have to know everything, and I think we can stipulate that omniscience and human beings don’t match up too well.

Even if the whole world goes insane, you have a holy responsibility to yourself to perpetually search for truth.  When people all around you are losing their heads, the surest way to keep yours is to be vigilant about basing your actions on truth.

Whether you accept some, any, or all of my opinions, I will have accomplished my purpose if the results of my search for truth inspire you to embark upon, or intensify, your search for truth.

Truth is the best friend you will ever have, because, unlike people, it will never desert you in your time of need.  Think of truth as a compass that points the way to actions that are in your long-term best interest.

This is why your search for truth must be ongoing and in conjunction with an action-oriented life.  If you ever feel as though the Higher Power has not come through for you, it could be because your actions have not been in accordance with truth.

Unfortunately, truth is not an easy proposition.  For one thing, truth can sometimes make you unpopular.  In extreme cases, it has even cost people their lives.  Bruno (burned at the stake as a heretic) and Socrates (forced to drink poison after being accused of corrupting youth by questioning tradition) are two well-known examples of this.

As a baseline, then, anyone searching for truth must desire truth more than popularity.

As we all know, fools are often among the most popular people in society, which is a good reason not to allow your search for truth to be stifled by the widespread delusions of the masses.  This is precisely why you must learn to question everything, especially so-called conventional wisdom.

In the words of Buddha, “Believe nothing, no matter where you read it, or who said it, no matter if I have said it, unless it agrees with your own reason and your own common sense.”

All of life is based on universal principles, or laws.  We cannot create or alter principles; we can only try to discover them, and, once discovered, find ways to use them to our advantage.  A principle is a natural law that has always existed and will continue to exist as long as there is a universe.  A principle is the essence of truth.

The foundational principle of the universe, as well as all aspects of secular life, is well known to everyone:  Actions have consequences.  If I push you (an action), something will happen; i.e., there will be a consequence.  You may fall down, you may stumble, or, at the very least, you will feel pressure against your body.  You also may get mad at me, walk away, or push me back.

The point is that I cannot escape the reality that my action, no matter how small, will have consequences.  Where I start to invite problems into my life is when I delude myself into believing that I can push you without there being any consequence at all.

Believing that one can create his own principles is a futile and dangerous way to live life.  Of course, a person has a perfect right to go on believing whatever he wants to believe, but truth isn’t discriminatory.  It will mete out negative consequences just as harshly to a well-meaning, ignorant individual as to one who is malicious and self-delusive.  Not once has truth excused anyone for being well meaning.

Put another way, truth is Stoic in nature; it doesn’t concern itself with human intentions.  Truth overwhelms everything and everyone in its path.  It matters not whether a violation of truth is intentional or a result of poor reasoning powers; in either case, truth yields the same consequences.

In the short term, of course, truth can be violated.  A rational life, however, is based on taking actions that result in long-term success.  Fortunately, history has repeatedly demonstrated that time is extremely kind to truth.

As Winston Churchill put it, “The truth is incontrovertible.  Malice may attack it and ignorance may deride it, but in the end, there it is.”

In simple terms, the more often your actions are based on truthful premises, the more likely you are to achieve success in both your business and personal life.

[Ed. Note.  Robert Ringer is a New York Times #1 bestselling author and host of the highly acclaimed Liberty Education Interview Series, which features interviews with top political, economic, and social leaders. His recently released work, The Entrepreneur: The Way Back for the U.S. Economy, shows the pathway back to prosperity paved by entrepreneurs. Ringer has appeared on numerous national talk shows and has been the subject of feature articles in such major publications as Time, People, The Wall Street Journal, Fortune, Barron’s, and The New York Times. To sign up for his e-letter, A Voice of Sanity in an InsanWorld, visit www.robertringer.com.
Posted in Motivation, Self-Improvement
This error message is only visible to WordPress admins