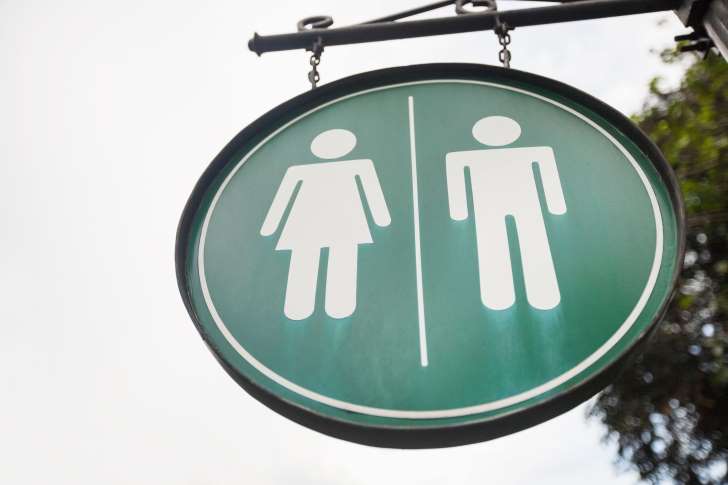 As an infamous children’s book puts it, everyone poops. But we hardly ever talk about it. When was the last time you sat down and talked to a friend—or even your doctor—about what your poop looks like, smells like, or even sounds like? If you’re like most people, the answer is never. That silence hasn’t just left us in the dark about our toilet-time activities, it’s also allowed for some pretty pervasive (and mostly untrue) myths about what makes a “healthy” poo. We talked to a poopologist (okay, a gastroenterologist) to decode those myths. Here, everything you never wanted to know about poop.

This is the myth that won’t die, despite a total lack of scientific evidence supporting it. “At the end of the day, we define anything less than three times a week as abnormal,” says Kyle Staller, MD, a gastroenterologist at Massachusetts General Hospital. “But any pattern can be healthy as long as your frequency doesn’t impact your quality of life.”

While it probably won’t make you feel great, holding in your poop won’t cause any harm. “It’s good to have the ability to hold it in until there’s a socially acceptable place and time,” says Patricia Raymond, MD, FACG, a gastroenterologist and associate professor of clinical internal medicine at Eastern Virginia Medical School. Just don’t make a habit of stifling your urges, says Staller. “We’ve found people who hold their poop longer because of their profession—nurses, teachers, or truck drivers, for example, or people who are afraid to go at work—can get into bad habits that cause constipation or dysfunction in the muscles used for pooping,” he says.

No matter what, poop is going to stink. But Raymond says the smell quality of your bowel movements does change depending on your diet. The more veggies you put in, the less it will smell. “Herbivore leavings smell much better than a carnivore’s,” says Raymond. Still, if your poo goes from kind of smelly to off the charts unbearable, there might be something wrong. “That can be a sign that you’re not digesting food properly,” Raymond says.

Once and for all, your colon doesn’t need cleansing. Depleting the stores of healthy bacteria in your colon through a prolonged cleanse can lead to cramping, bloating, nausea, and electrolyte abnormalities, says Staller. “Your colon is meant to have stool in it at all times,” he says. Unless your colon needs a cleanse for medical reasons, both Staller and Raymond suggest you leave the poor thing alone.

If you remember your middle school science, you know anything denser than water is going to sink. If you notice your poop is floating every time you go, make an appointment with a gastroenterologist, says Raymond. This can be a sign that you’re not absorbing fat and oil properly. However, occasional floaters are nothing to worry about. “If you eat something that causes a lot of gas, it’ll float,” says Staller. That’s just a reflection of your diet for the day.

While some white foods—like rice and toast—may help, there are others you definitely want to stay away from—like milk and cheese. In fact, Raymond says there isn’t a single diet 100% known to help diarrhea, despite doctors prescribing the BRAT diet (bananas, rice, applesauce, tea, or toast) to kids for decades. The only thing that definitely helps, she says, is to make sure you stay really well hydrated. But that doesn’t mean you should guzzle a gallon of Gatorade or even put in your 8 cups of water that day. Neither will help your body regain the salt and potassium you’ve lost through your bowels. Instead, whip up a batch of the World Health Organization’s Oral Rehydration Solution—1 liter of water, 6 teaspoons of sugar, and ½ teaspoon of salt. Sip the solution throughout the day, making sure you’re putting in twice as much as you’re losing.

Although the magazine rack sitting beside your toilet suggests otherwise, taking a long time in the bathroom probably has more to do with what’s distracting you while in the john. (Struggling to beat that level of Candy Crush?) “We were set up since we were cavemen to be able to squat quickly and then keep going,” says Raymond. But don’t worry if it takes you a little longer to let loose, everyone is different. But you shouldn’t strain all the time, says Staller; if you do, talk to your gastroenterologist about possible causes and solutions.

Raymond blames Dr. Oz for this myth, which she says is a gastroenterologist’s nightmare. “He was talking on Oprah and he said that your bowel movement when it comes out and hits the toilet bowl should make almost no splash – like an Olympic diver entering a pool,” she says. “And if your bowel movement makes a splashing noise you should see your gastroenterologist immediately.” His statement sent waves of perfectly healthy people concerned about their splashing poo straight to the nearest gastroenterologist office. Raymond’s tip: stop listening to your poop. “There’s no particular sound your poop should make when it hits the toilet bowl.”

10. Truth: Poop should usually be brown.

“Doctors don’t like red, purple, or black,” says Raymond. “Those colors usually indicate blood.” (Or it could be the beets or cherries you ate, so think about what you had for lunch before you freak out.) White or clay-colored poop mean there’s a blockage in your bile duct. And the super rare silver, which Raymond has only seen in medical photos, means a tumor has latched on to the opening of the bile duct. On occasion the color may vary for perfectly natural reasons, says Raymond. “Sometimes you’ll see yellow or green,” she says. Those colors result from bile that’s secreted up by the gall bladder and liver area, and should clear up by your next trip to the facilities.

Posted in Health, Nutrition
#repost from @motivationmafia With all the hard w