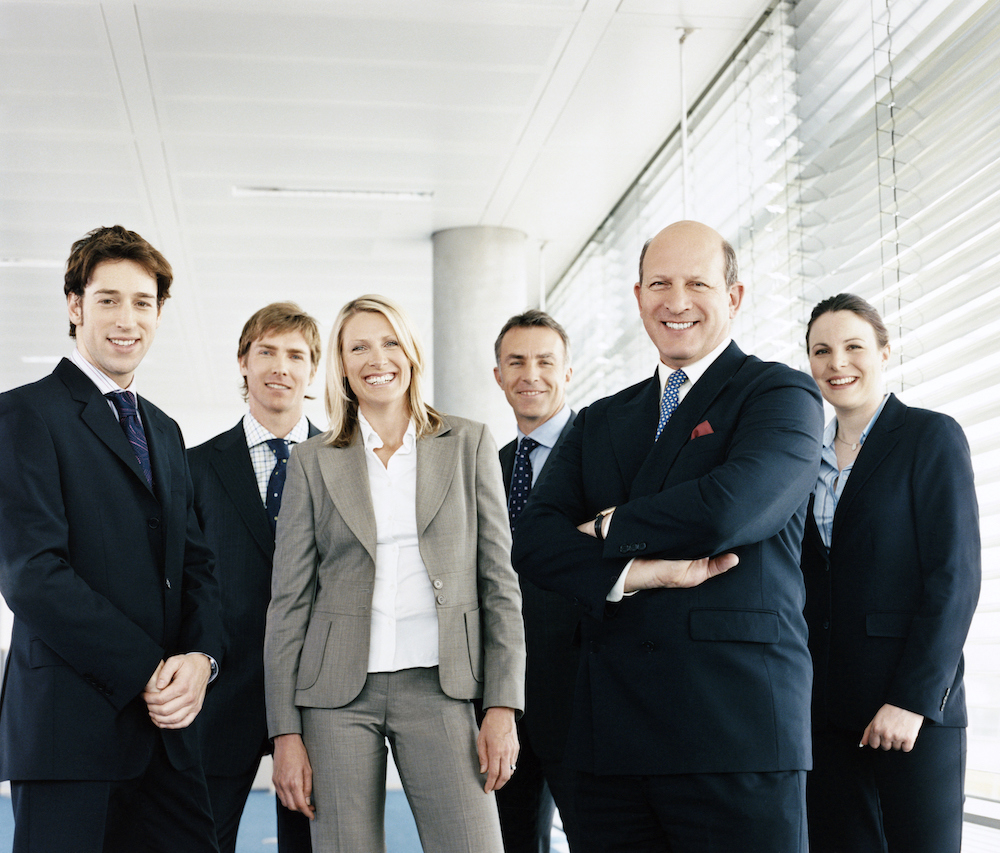 Every Sunday night, I send my coaching clients an accountability email. The aim is simple: Remind each one of their goals and encourage them to take steps toward success.

In this past week’s email, the “motivational message” came from my first ever Work-Life Mastery meeting—a small-group coaching session designed to push ambitious high-achievers to the next level of health, wealth, and happiness. (More on that here.)

While everyone in attendance had differing perspectives on how to get to the next level, there was one unquestionable commonality: Leadership was necessary for their success.

Here’s how I explained it in my email: “Everyone in the room recognized that they needed to step-up their leadership game, and we spent over three hours creating leadership scripts and practicing our new skills with greater confidence than ever before.”

I learned this years ago, which is why I closed my email with this advice: “I want you to remember these five words in every situation at work and at home…

Easy enough? In theory, yes. In practice, however, the application of these qualities is harder. So let’s take a look at how modern business leaders are exemplifying these qualities—or not—and what we can learn from them.

In the early 2000s, European carmaker Fiat was bleeding red. But CEO Sergio Marchionne managed, somehow, to turn the company profitable within two years. In 2009, he worked the same magic with American carmaker Chrysler, merging the company with Fiat and putting it “back in black.”

But these days, Marchionne waffles on future development, particularly when it comes to electric cars in the Ferrari portfolio. As one recent article paints, the “Magic 8 Ball” Marchionne bobs between assuring the public electric Ferraris are a soon-to-be reality and making snide comments to media about how much he hates the idea.

He also seems to waver on what to do about the growing popularity of SUVs and crossovers.

What’s the result? A public that looks elsewhere for innovation. Marchionne’s indecision might just be the death knell of Ferrari as future sports and luxury cars go electric. If he’s banking on name and history to carry the carmaker, he might take a look at how that has played out for a thousand other brands that have had far too much confidence in their brand currency.

If Marchionne wants to be a traditionalist, then so be it. If he wants to ride the wave of electric cars, more power to him. But he needs to pick a direction, lest he lose the confidence of the consumer.

Well, not quite. These days, EQ (emotional quotient) is as important to effective leadership as IQ. Understanding employees’ needs and recognizing the interconnectedness of work and personal life is key to creating a productive, happy work environment. And as countless studies have shown, happy and appreciated employees are the most engaged.

Leaders under pressure, however, often react strongly to mistakes or unfavorable information. To nip this in the bud, Buffet (among other successful CEOs) uses the 10:10:10 Rule. It’s simple enough—just ask yourself how a pending decision is likely to affect you in 10 minutes, 10 months, and 10 years. That perspective is often enough to keep you from flying off the handle and acting on raw emotion instead of reason.

And while keeping emotions in check is critical to balanced leadership, so is a certain degree of empathy. As “omnimedia” queen Oprah says of her leadership philosophy: “Leadership is about empathy. It is about having the ability to relate to and connect with people for the purpose of inspiring and empowering their lives.”

In the October 2016 issue of Inc. Magazine, speaker/author/guru Tony Robbins was featured as figure-of-the-moment. But it wasn’t financial success or celebrity that Inc. was interested in—it was Robbins’ confidence.

Indeed, Robbins has convinced many of us that we can be just as confident—and we’re so enthralled with his unwavering certainty, we believe him. Why? Two reasons.

First, when you know your mission and how to execute it, there’s no room for faltering. You retain momentum regardless of possible dangers or obstacles, taking risks as though they were second nature.  In Robbins’ own words: “There’s the business you’re in, and the business you’re becoming. If you’re constantly managing those two businesses, you won’t have to pivot [read: waver], because you’re always doing something to innovate.”

Second, confidence is built through successful relationships. And you build those relationships not by advertising what you have to offer, but by asking one simple question of the people you meet: “How can I help?” That engenders warmth and generosity, and from that, a relationship builds—whether personal or professional.

With these two clear-cut perspectives at our disposal, no wonder we feel our own confidence on the rise.

Some may say that there’s more to Robbins’ confidence than these seemingly simplistic philosophies. But “fan-turned-friend” Tim Ferriss says otherwise: “Robbins has outlasted so many other life coaches because he doesn’t just dish out advice—he actually takes risks.” In other words, he models the behavior he asks others to take. And his modeling follows the same “simplistic philosophies” he encourages others to follow.

What should a CEO realistically ask of his or her employees? And what’s the best way to share those expectations with those who need to meet them?

As part of Harvard Business Review (HBR)’s CEO Genome Project, a 10-year study designed to identify the attributes of high-performing CEOs, four key behaviors came to the fore. Preparation and performance were, not surprisingly, tops on the list—as was confident decision-making—but equally as important was a CEO’s establishment and communication of expectations.

Reliability, countless company board members affirm, is one of the main reasons for hiring a new CEO. That stands to reason; their results are consistent year after year, and it’s easy to unpack their successes.

But HBR dug deeper, pointing to this underpinning of CEOs’ reliability: “A key practice here is setting realistic expectations up front. In their first weeks on the job, reliable CEOs resist the temptation to jump into execution mode. They dig into budgets and plans, and engage with board members, employees, and customers to understand expectations. At the same time, they rapidly assess the business to develop their own point of view on what’s realistic and work to align expectations with that.”

In other words, expectations are understood from both sides—what the company expects of its CEO and what the CEO reasonably expects of his/her employees. And those expectations aren’t culled from emotional or impulsive decisions; rather, careful research and observation serve as the foundation.

The last, critical piece of this behavior is communication of both the expectations themselves and an ongoing assessment of how the entire company—from the top down—is meeting those expectations.

Here’s an amazing example of reliability, on-point communication, and accountability, again courtesy of the CEO Genome Project: “In 2012, when Scott Clawson took the helm of Culligan, the water treatment company, he inherited a struggling business that everyone believed had an EBITDA  (Earnings Before Interest, Tax, Depreciation, and Amortization) of $60 million. After completing his own due diligence, he had to break the news to investors that the real run rate was closer to $45 million. Though he got pushback about the lower target at first, he went on to revamp the firm’s business system and talent and delivered above expectations—to the delight of his board and investors.”

In the wake of reams of bad press on United’s handling of passenger dos and don’ts—including forcibly removing a passenger from an overbooked flight— CEO Oscar Munoz earned PRWeek U.S.’s Communicator of the Year Award in 2017.

There are two sides to every story, of course, and this one is no exception. Some of Munoz’s under-the-radar communication of needs, appreciation, and expectations was indeed laudable. PRWeek relates, “Munoz won praise from union bosses for his easy rapport with shop-floor workers, a rarity in any industry. Undertaking an extensive meet-and-greet tour across the United network, Munoz rebuilt employee confidence in the airline brand.

He connected well with the airline’s pilots, flight attendants, mechanics, and other workers partly because of his blue-collar roots—his father was a union meat cutter—and he hasn’t been shy opening up to employees or media about his heart problems. He invited Fortune to follow him on the job, which resulted in a highly positive feature.”

And while many on social media excoriated Munoz for his handling of the company’s 2017 blunders, he wasn’t shy about taking responsibility for them during his PRWeek acceptance speech:

“I apologize for creating the situation that led us to assault, injure, and publicly humiliate a human being. Our team is moving with a sense of urgency to work with the authorities and conduct our own detail review of what happened.”

PRWeek justified its decision by pointing to Munoz’s less glamorous achievements during his years at the helm. And while many rightfully argue United’s passenger abuse never should have happened, Munoz chose to communicate his responsibility in light of the expectations of him as CEO, instead of avoiding it altogether.

These examples, both of what to do and what not to do, make clear the unshakeable value of leadership in all industries. Even beyond business, leadership helps foster relationships, support communities, and encourage innovation.

So if my accountability email were to land in your inbox tomorrow, what leadership skills would you say you need to work on?

Imagine how much more successful your life would be if you did.

Lead On, In Work and in Life

Become a shining example of leadership to everyone in your life. Start with this indispensable course from ETR University. >>>